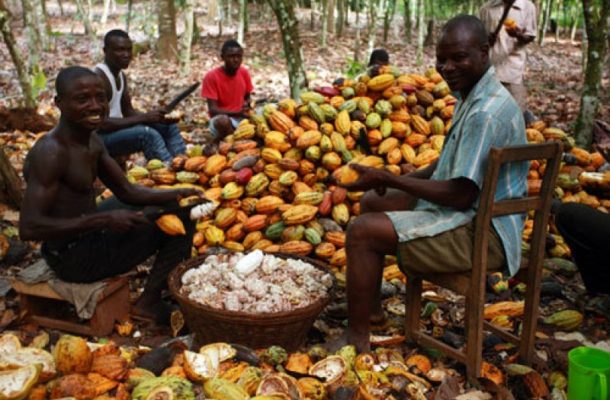 The 2016 presidential candidate of the New Patriotic Party, Nana Addo Dankwa Akufo-Addo, has assured cocoa farmers across the country of a revival of the cocoa sector, which will ensure that the dwindling fortunes of the sector, presided over by President Mahama over the last 8 years, are reversed.According to him, with Ghana barely managing to produce 740,000 metric tonnes of cocoa in the 2014/2015 crop year, from a peak of 1 million metric tonnes in 2010/2011, achieved with programmes initiated by the Kufuor-led NPP administration, the cocoa sector, once a major foreign exchange earner for the country, is in dire need of rescue.Thus, an Akufo-Addo government, God-willing, from 2017, will institute measures including: the payment of significantly higher producer prices of cocoa above the current levels; the reintroduction of bonuses scrapped by the NDC government; and the reintroduction and non-politicisation of the mass spraying exercise and the hi-tech programmes.This, Nana Akufo-Addo noted, will increase massively cocoa production, whilst, at the same time, improve the welfare and livelihoods of cocoa farming communities across the country.The NPP flagbearer made this known on Thursday, August 11, when he addressed the Chiefs and people of Adabokrom, in the Bia East constituency, at the commencement of day 2 of his 5-day tour of the Western Region.Nana Akufo-Addo explained that it was during the era of President Kufuor, from 2001 to 2009, that the cocoa industry was made lucrative and profitable.“It was because of the good policies implemented by President Kufuor that cocoa production became very lucrative. This development ensured that cocoa farmers had money in their pockets, which improved their standards of living. Whether you were Dagarti, Kusasi, or Sefwi, once you were involved in cocoa farming, you benefitted immensely,” he said.However, under the Mahama administration, Ghana, in the 2014/2015 crop season was barely able to produce 740,000 metric tonnes of cocoa.“It is not right that Ghana, with the same land mass and geography as Cote d’Ivoire, produces barely 740,000 tonnes of cocoa whereas Cote d’Ivoire produces 1.5 million tonnes. The decline is as a result of bad policies implemented by the Mahama government. We are coming to revive the cocoa industry and put monies in the pockets of cocoa farmers,” he assured.To this end, he assured that “the cocoa industry is one I will pay particular attention to. The work President Kufuor did to lift up the cocoa industry is one I will emulate. Whatever has collapsed will be revived under Akufo-Addo. The mass spraying gangs are coming back. Everybody is going back into employment in the cocoa industry.”Source:Starrfmonline