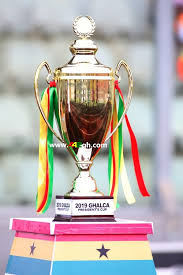 National Sports Authority boss Prof. Twumasi has revealed that his outfit were not aware of any Ghalca president cup event to be staged at the Accra Sports Stadium.

The President Cup was postponed to the Capital, after a rained-off game at Baba Yara Stadium in Kumasi, but due to the Icardi B concert which happened at the Accra Sports Stadium, the game has been returned to Oseikrom because of the bad nature of the pitch after the show.

The NSA boss Twumasi explained to Accra based Atinka Fm claiming the NSA have no idea of any president match at the "Nation's Wembley".

"No one has inform me about the upcoming Ghalca President Cup, I heard it in the media and I even called Mr. Fiano to confirm what I heard."

"His response to me was that they are considering if they can use Accra Sports Stadium, but they have not come into conclusion yet."

"And that was even yesterday, so the Ghalca president cup match was not in our plans." He added.

Ghalca has reschedule the game to Baba Yara Stadium in Kumasi, on Sunday December 22