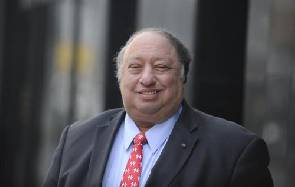 Mr Catsimatidis is well known to many New Yorkers, having run for mayor

The grocery store tycoon and former mayoral candidate took to Twitter to offer a bounty of $5,000 (£3,870).

He told the New York Post newspaper that thieves are stealing cartons of ice cream in order to resell them to smaller shops, known as "bodegas".

Police have received 250 complaints and made 130 arrests, the Post reports.

Mr Catsimatidis, who owns the Gristedes grocery stores, tweeted that the bandits are "wreaking havoc on NYC supermarkets" and told the newspaper that the thefts are being encouraged by the bodegas.

He shared an example of an attempted theft at one of his stores earlier this week in the Chelsea neighbourhood of Manhattan, in which the thieves were filmed on mobile phone cameras.

A man and woman shoved 80 tubs of ice cream into bags and then ran from the store.

But police say that the couple abandoned the frozen treats on the street after they were chased by store employees.

City officials have called the resale of ice cream a public health risk, since the dairy products can become contaminated with germs if left outside of the freezer.

New York City is experiencing a heatwave that is expected to last several more days. Temperatures are expected to reach 110F (43C).