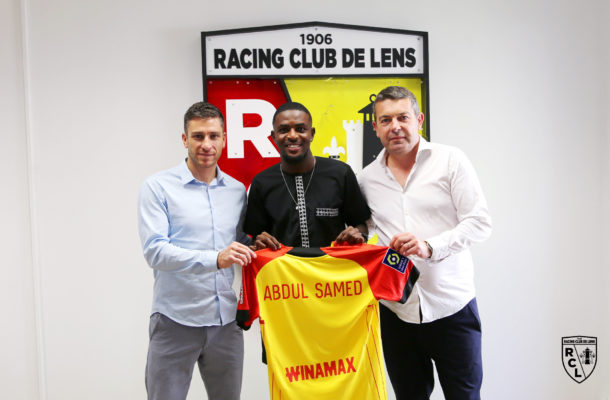 The transfer is believed to have cost RC Lens 5million Euros plus add ons for the versatile Ghanaian player who can play in several positions.

The versatile player was very impressive for his former side Clermont Foot in the French Ligue 1 and helped his side beat relegation to Ligue 2.

Arnaud Pouille, Managing Director  : “The arrival of Salis is a great satisfaction. This recruitment is part of the continuity of signing high-potential players that Racing is targeting. Salis is a complete midfielder, whose physical skills and technical qualities are highly developed for his age. His training at the Jean-Marc Guillou Academy in Ivory Coast enabled him to acquire a solid background and his years in Clermont were beneficial in his quest for regularity. I also take this opportunity to thank the CF63 managers with whom the exchanges were particularly courteous. I see in the test he had passed with us in 2019 a wink of fate. Beyond his qualities as a footballer, Salis relies on a communicative joie de vivre that fits perfectly with the spirit of our professional locker room. »

Salis who is adept at playing at center back, in midfield and as a fullback was keen to leave Clermont Foot for pastures anew.

Florent Ghisolfi, sporting director  :  “We are happy to confirm the arrival of Salis, a player who we have been following very closely for many months. He was our priority at the post. He is a player who has a high volume of play and running, and a lot of intensity. Salis is a complete midfielder, influential in both defensive and offensive aspects, but whose development potential remains significant. His qualities, his commitment and his generosity fully include Salis in our project. »

Samed played 31 Ligue 1 games and scored one goal is valued at 3 million Euros by transfermkt.

He was called up to the AFCON 2021 tournament squad but injuries forced him out and played for the Black Stars at the recently held Kirin Cup.