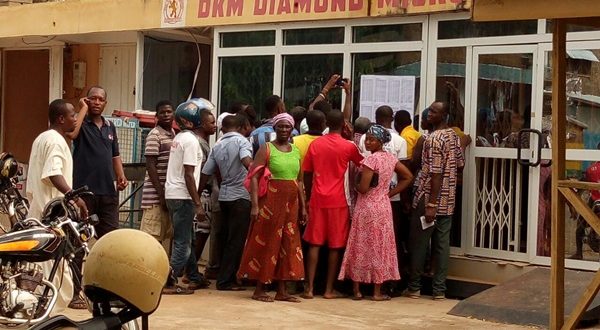 The Official Liquidator has disclosed that payments to creditors of DKM Microfinance are set to commence on Monday, October 17, 2016.

A statement released by the Registrar General’s Department said, “There will be payment of dividends to unsecured creditors of DKM Diamond Microfinance Limited (hereinafter called ‘DKM’) whose claims have been agreed and validated in the liquidation process, in the week commencing 17th October 2016.”

According to the statement, the list of the first batch of validated customers will be released on October 10 at some designated places across the country.

“On Monday, 10th October 2016, the first batch of unsecured creditors namely, DKM Investment and Susu Account holders only, whose claims have been validated and agreed in the liquidation process will be posted at the following locations,” it added.

Designated areas for the publication of DKM creditors


Over 70,000 customers of DKM Microfinance have so far been validated by the Official Liquidator for payments to be made.

The company was forced to suspend operations over a year ago after the industry regulator; the Bank of Ghana, found that it had flouted some regulations in the financial industry.

The Official Liquidator had served notice that payments will commence in the first week in October.

It was however compelled to reschedule over logistics challenges.

But the publication to be issued is expected to contain the names of creditors whose claims have so far been validated; DKM Account numbers of these creditors (as appropriate); designated “Recipient Bank” branches where payments will be made to creditors as well as specific dates when payment will be made to batches of individual creditors.

Meanwhile GCB Bank has been appointed as the recipient bank for the payments.

The statement however assured that “creditors  whose names do not appear on the list of claims validated to date, are advised to contact the Official Liquidator’s Customer Service Units to be set up in the various Recipient Bank branches for further direction.”

It further assured, “Creditors should note that the list of validated creditor claims will be updated and supplementary lists would be posted as and when new creditor claims are agreed and validated.”

The mode of payment for the first batch according to the Official Liquidator is scheduled as follows;


Meanwhile, “creditors are to note that the first round of payment will be interim dividends. The timing and quantum of future payments will be determined by the levels of asset realizations, liquidation costs, and creditor claims proven and submitted,” the statement further noted.