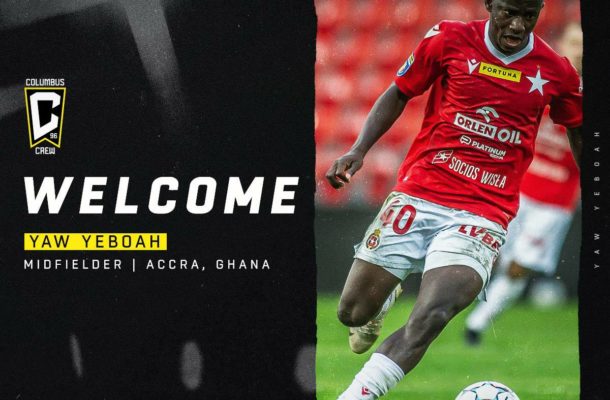 The winger joins the Black & Gold until 2024 season with an option for an additional year as Yeboah takes an international spot on Columbus’ roster and won’t be officially added until he obtains his International Transfer Certificate and P-1 Visa.

In order to make the transfer compliant with Major League Soccer rules, the Crew used Targeted Allocation Money to put his salary within team limits.

“Yaw is a young winger whose dynamic style of play has made him one of the most exciting up-and-coming players in the Ekstraklasa during his time in Poland,” Crew president and general manager Time Bezbachenko said in the release announcing the signing. “In addition to playing in some of the top leagues in Europe, Yaw also brings valuable international experience with the Ghanaian National Team.”
The former Manchester City trainee has played for clubs in Spain, Netherlands, France among others after joining Manchester City in 2014.

The new Crew winger didn’t play any matches in the powder blue of Manchester but has experience in international competition with Ghana’s national team.
In 2021, he played in three World Cup Qualifiers, starting one with now-fellow Black & Gold teammate, Jonathan Mensah.

Yeboah was not included in squad list for the African Cup of Nations, which is slated to begin on Jan. 9. Mensah and the Ghanaian National Team begin their group stage against Morocco on Jan. 10.

Since the beginning of the 2021-22 Ekstraklasa season, Yeboah’s started 17 matches for Krakow, registering five goals and an assist. In 170 appearances, Yeboah’s scored 19 goals across multiple professional competitions. That scoring is what the Crew looks for in the signing, after a season where Columbus’ group of wingers scored just four goals in the run of play. Only newly re-signed midfielder Pedro Santos registered more than one goal in the role.

“We believe this addition to our roster will strengthen our attack and help us increase production out wide,” Bezbachenko said of Yeboah’s addition to the corps or the Black & Gold wingers.

Yeboah joins Luis Diaz, Derrick Etienne Jr., Kevin Molino and Alexandru Matan in a fight for a spot opposite Santos. Over the past two seasons, the winger spot has been the one area of the field where players rotated the most, even when healthy.

This signing adds pressure to Diaz, Etienne, Molino — once healthy — and Matan to produce at a higher level. Black & Gold players report to Columbus on January 16 to begin the 2022 preseason.