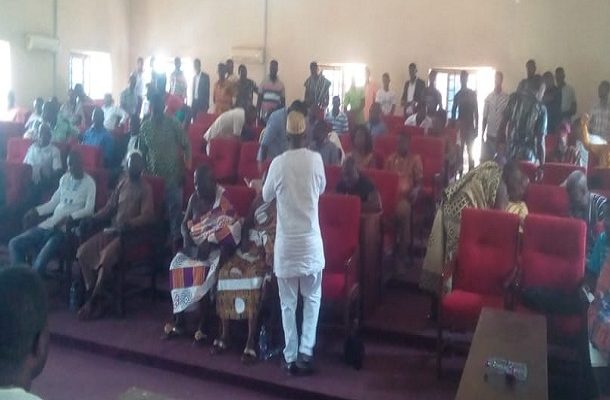 The quest to elect a Presiding Member for the Offinso South Municipality in the Ashanti Region, has failed for the 4th time as the situation has compelled the process to be postponed until further notice.

The Deputy Ashanti Regional Minister, Hon Elizabeth Agyemang on Monday, March 2, 2020, announced that the election has been postponed indefinitely.

None of the aspirants could garner two-thirds (44) votes of the house to be elected as a Presiding Member.

Hon Elizabeth Agyemang addressing the Assembly Members at the Assembly Hall, postponed the election indefinitely and expressed her displeasure about the assembly’s failure to elect a Presiding Member on several occasions.

She expressed with great concern the faction and division within the governing New Patriotic Party (NPP) in the Offinso South and threatens to report and briefs the Ashanti Regional NPP executives on the weakening state of the party in the Municipality.

On his part, Nana Kofi Boahen 1, the Baamuhene for Offinso Traditional Council who is a government appointee for Nananom, Speaking to Kaakyire Kwasi Afari, lamented the slow pace of developments in the area this year, but attributed to the lack of Presiding Member for the assembly.

Nana Kofi Boahen said, the Traditional Council will urgently sit around the table, to decide their actions to help the Assembly elects its PM to help foster development in the area.