Olympic spirit: New Zealand and American runners help each other after collision 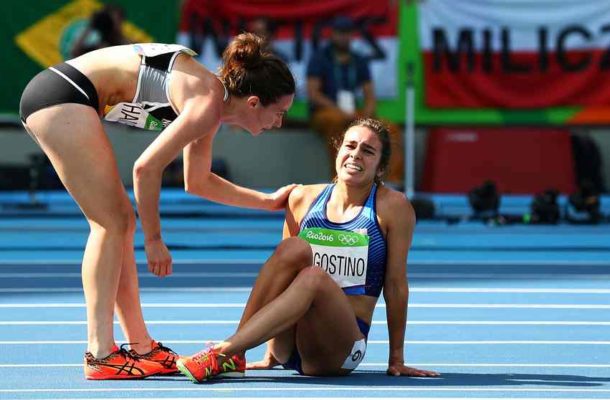 Nikki Hamblin and Abbey D’Agostino finished last in the 5000m after coming to each others’ aid following a mid-race fall.
A New Zealand and US athlete have been praised for embodying Olympic spirit after they stopped to help each other up after falling together midway through their race.
New Zealand Distance runner Nikki Hamblin and US runner Abbey D’Agostino were four laps from the end of the 5000m in Rio when they collided.
Hamblin, bunched tightly in the mass of running women, stumbled and fell face forwards, causing her US competitor D’Agostino – who was running directly behind her – to hit the track as well, falling on the side of her body.

As Hamblin lay in the foetal position on the track D’Agostino jumped up quickly and pulled the New Zealander to her feet.

Moments after the two athletes had started running again, D’Agostino began faltering, her right leg injured as a result of the fall.
In severe pain, D’Agostino fell again to the ground, crouching on all fours on the Olympic track, her face showing she was in pain.

Hamblin stopped running and turned to D’Agostino, reaching for her with two open arms – the race and Olympic glory, forgotten.

“When I went down it was like, ‘what’s happening? Why am I on the ground?’ Hamblin said after the race.

“And suddenly there’s this hand on my shoulder, like ‘get up, get up, we have to finish this!’ I’m so grateful for Abbey for doing that for me. That girl is the Olympic spirit right there.”

“Sometimes I guess you have to remember trying to be a good human being is more than, you know. If I hadn’t waited for her or tried to help her I would have been 10 or fifteen seconds quicker and what does that matter?”

The two competitors finished the race last, and embraced closely before D’Agostino was taken away in a wheelchair for treatment.

The pair were lauded on social media for their sportsmanship.