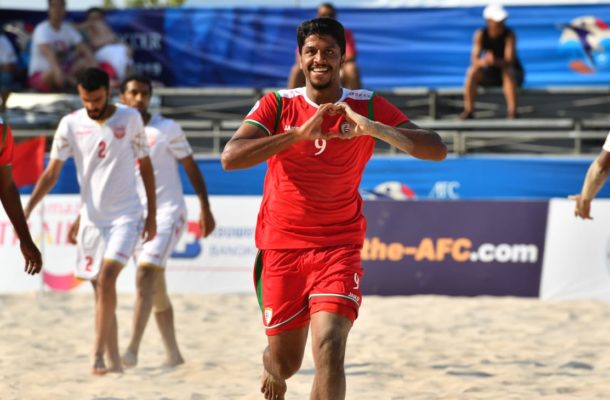 Pattaya: Oman became the first side to book a place in the AFC Beach Soccer Championship Thailand 2019 semi-finals, after they defeated Bahrain 5-3 in a close-fought quarter-final on Thursday.


Two goals from Khalid Al Oraimi, both scored at crucial times, were the key to victory for Oman, who are now one win away from both the competition's final and a place in the 2019 FIFA Beach Soccer World Cup in Paraguay.

Bahrain's brave defeat eliminates them from the competition, and ends their hopes of returning to the global Finals after a 10-year absence.

With a place in the last-four on offer, the match began at an appropriately cracking pace, with both sides finding the back of the net inside the first minute of play.

First Mohamed Darwish Ebrahim struck for Bahrain, beating Amjad Al Hamdani with an effort that deviated up unpredictably off the sand, but Oman were level within seconds as Khalid Al Oraimi fired in a forceful equaliser following a kick-off move.

Oman took the lead in the fourth minute through Mushel Al Araimi, who produced a low effort that Bahrain's Sayed Mohamed Abbas got a hand to, but couldn't keep out, but Bahrain restored parity five minutes later via Rashed Jamal's low free-kick.

But, as with their opener, Bahrain conceded within seconds of scoring, with Sami Bulushi arriving to make it 3-2 in the ninth minute, with the woodwork preventing both Al Bulushi and Jilal Al Sinani from adding to the tally before the end of the first period.

Bahrain found a way back into the contest through an unlikely source, with Oman captain Yahya Al Araimi sending what was intended as a retreating pass to Al Hamdani over the shot-stopper and into his own net in the 14th minute.

Mahmood Al Ghawi's side were making do without Isa Al Doseri and Hesham Ahmed, who were both suspended, but they continued to give Oman headaches, and it took Al Hamdani's fingertips to prevent them from re-taking the lead through goalkeeper Abbas.

With Nooh Al Zadjali missing a golden late chance for Oman, the second period ended locked at 3-3, setting up a frenetic final term on which the tournament survival of both sides would hinge.

A moment of class from Al Oraimi gave Oman their lead back, when the 26-year-old shifted the ball to give himself a fraction of space before rocketing a fantastic goal from the middle of the pitch in the 27th minute.

Abdulla Al Abdulla fired wide for Bahrain with five minutes remaining, and Oman's Abdullah Salim missed an open goal at the other, but Yahya Al Arami had the last word, bouncing home a free-kick to make it 5-3 and seal an important win for Talib Hilal's side.
Talib Hilal, Oman head coach

"First of all, I have to say thanks very much to my players for winning this match. It was a tense match. If you lose, you're out, if you win, you go on. We didn't play as I expected, especially in the first and second period. We weren't in form like in the last match (against Islamic Republic of Iran), but at the end we won it.. Thanks for my players and for the Omani people."

"Thank you for everything. This was the last game for my team. It was a very tough game against a strong team. I think they will go to the final. They beat Iran, the second best team in the world and the winners in the last competition. We have some problems, two players couldn't play (through suspension), and today was very hot also. I'm sad, but I'm very happy with my team. We'll be back in."