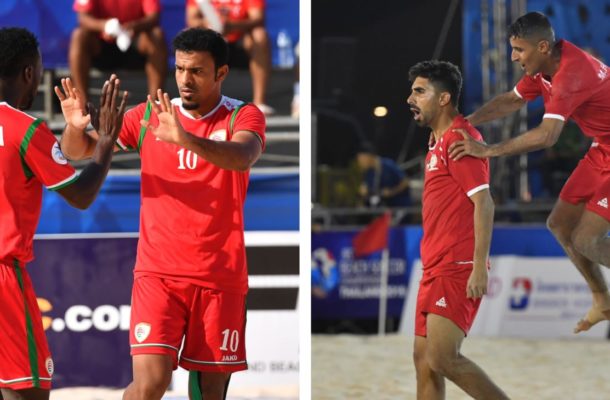 
The match is the last chance for either side to book a place at this year's FIFA Beach Soccer World Cup in Paraguay, after both lost their respective semi-finals on Friday.

Hilal - whose side suffered a narrow 3-2 defeat to UAE for their first loss for the tournament - said the team who can recover quickest from the disappointment of semi-final day will be successful in the key match.

"We have one more chance tomorrow," he said. "It's our last chance to qualify for the World Cup.

"Tomorrow's match is all about the mental side. The player's must work hard to concentrate on the match. Technically, tactically, all the players are very good. The only thing I can change is the mental side."

Oman harbour hopes of a third appearance at the World Cup under Hilal, who previously guided the West Asians to the Finals in 2011 and 2015.

A highly-experienced coach at the highest levels of club and international beach soccer, the 44-year-old knows his way around the latter stages of a tournament, and believes the two-day break between the semis and final will benefit his team.

After being drawn in, and winning, a high-quality Group D, Oman met UAE just 24 hours after a hard fought quarter-final win against Bahrain, and Hilal said the intensity of those matches took their toll.

"We played three matches, very strong matches (before the game against UAE)," he said.

"(Against Bahrain) we played at four o'clock, in the heat, with a short recovery time.

"My players didn't relax against UAE, they used more effort (in the quarter-final) and played very hard, and the recovery time was very little. We had just one day."

While Oman must overcome the disappointment of a narrow loss against the Emiratis, Palestine must find a way to regroup after being on the wrong side of a 6-0 loss to Japan.

The heavy defeat to an Ozu Moreira-fuelled opponent ended the dream of an Asian title, but a first ever World Cup berth remains on the table for the West Asian side, who didn't compete in the 2017 edition of the AFC Beach Soccer Championship.

Palestine goalkeeping coach Talat Al Nems said there was little his players could do besides move on, and focus on the major opportunity which remains in their hands.

"We are looking to the next match, to hopefully finish third and qualify for the World Cup," he said.

"All the players were under pressure against Japan. Our players tried to attack the Japanese goal but we couldn't overcome the difference in the level of both teams. Mentally we were focusing on how to qualify for the final match, but we faced a very strong team."

"This match is now behind us. We must now prepare our players, rest them, and focus on the next match.

"We want to win the next match against Oman and qualify for the World Cup."

Palestine will welcome head coach Imadeldeen Hashim (pictured above) back to the technical area after he served a suspension in the quarter-finals, but Mohammed Al Sdudi will be unavailable after he collected his second red card for tournament on Friday.