One out of NPP’s 29 promises quantifiable - IMANI 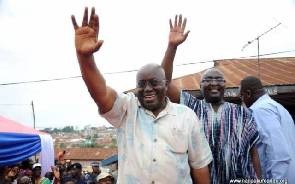 The opposition New Patriotic Party (NPP) has so far made 29 campaign promises ahead of the December election, policy think tank, IMANI Ghana has said. According to IMANI, out of the 29 promises, “only one is quantifiable, 14, semi-quantifiable and 14 non-quantifiable.”

This was disclosed by Hubert Nii-Amponsah, Deputy Head at IMANI in charge of Political and Economic Affairs today in Accra at a programme to analyse so far the promises made by the various political parties in the country.

According IMANI, because the parties, except the Progressive Peoples Party (PPP), were yet to release their manifestos, it had to rely on promises the parties made at the Institute of Economic Affair’s [IEA] encounters as well as those reported in the media.

“Under governance, 8 promises were found, 3, semi-quantifiable, and one interesting promise was to create a western north region during his [Nana Addo’s] tenure of office. What does the constitution say about this promise? Article 5 of the Constitution says that a commission of enquiry must show the president that there is substantive demand for a new region and a referendum conducted must entail at least 50 percent of persons entitled to vote. And once the vote is cast, the pass rate must be 80 percent in favour of the issue. So these provisions are to be satisfied in order for the promises to fulfilled,” Nii-Amponsah added.

NDC has made 20 promises

President of IMANI Ghana, Franklin Cudjoe had earlier disclosed that the governing National Democratic Congress had made 20 promises.
According to IMANI, the party, prior the 2012 election made more than 500 promises but “only 12 were quantifiable.

Nii-Amponsah further described as non-quantifiable promises by NPP to revive the National Health Insurance Scheme (NHIS) which they say is collapsing.

NPP communicators including its flagbearer, Nana Akufo-Addo have on several platforms accused the governing National Democratic Congress of collapsing what they say is the once vibrant NHIS, social intervention established during the erstwhile Kufuor administration.

They complained that government has been struggling to pay NHIS claims to facilities that have dispensed services to such beneficiaries.
Nana Addo has promised to ensure that challenges with the NHIS is resolved under his administration