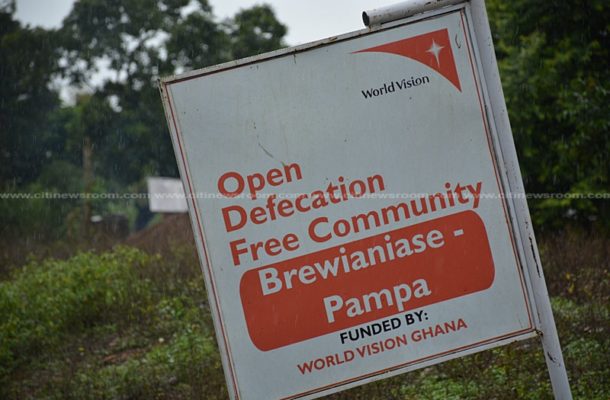 5.5 million Ghanaians, representing 17.7% of Ghana’s population (PHC 2021) continue to practice open defecation without shame as the government and assemblies look hopeless in fighting the canker towards sustainable development.

Sadly, 8,500 public schools in Ghana representing 26% have no toilet facilities, compelling pupils and students to engage in open defecation. Painfully, however, a staggering 3,600 children die every year from lack of toilet-induced diseases like diarrhoea, cholera and typhoid fever, especially in developing countries.

For instance, 22-year-old Sirigu Integrated Senior High School in the Kassena-Nakana West District of the Upper East Region still operates without a toilet facility for the student body, compelling them to defecate in the open and the girls being harnessed by community members.

Cleanliness scriptures say is next to Godliness but almost 95% of worship places such as churches and mosques in Ghana are without toilet facilities raising a critical question of what happens when nature calls?. Even at public places such as markets, existing toilet facilities are woefully inadequate in response to demand, while the stink and lack of maintenance culture become a disincentive for users.

This threat triggered the UN Sustainable Development Goal (SDG) 6, thus ensuring access to water and sanitation for all through availability and access to water, sanitation and hygiene (WASH) to address the menace.

Without a toilet, life is filthy, risky, and undignified, yet 3.6 billion people still live without safe or no toilets subjecting about 700 children less than five years old to die every day due to poor sanitation.

Chairman of the Coalition of Media against open defecation (M-CODe) in Ghana, Yaw Attah Arhin, describes the situation as a dent on the country in a 21st century. He bemoaned poor leadership and lack of commitment by key stakeholders, particularly assemblies to drive an open defecation-free agenda.

Ghana’s cosmopolitans, metropolis and urban cities may have considerable toilets, however, the weakness and disinterest of assemblies have embodied landlords to build without toilet facilities and still go unprosecuted. Poor planning and inadequate toilets at major markets in Ghana have also exacerbated open defecation.

At the rural level, Ghana in 2010 implemented the Community-Led Total Sanitation (CLTS) in the five regions of the Northern, the Volta and Central regions to support communities construct household toilets but no region has fully meet the open defecation standard though some thrives have been made.

For instance, since the CLTS was implemented in the Upper East Region in 2012, only 1,103 communities out of 2,313 in the 15 districts had attained open defecation free status by July 2022.

Suffice to add that, most government institutions in the Upper East Region do not have toilet facilities for staffs and visitors who come to patronize their services and even with the very few institutions with toilets it’s a preserve for only staff.  This has further worsened the situation.

Mr. Arhin, attributes government’s lack of commitment in providing logistics and funding for toilets projects and equipping the environmental health officers and the rent control departments nationwide to prosecute perpetrators to serve as deterrent.

He admonished government to work with all stakeholders to urgently address the menace of open defecation.

Upper East Regional Chairman of the Ghana Journalist Association (GJA), William Jalula, called for the criminalization of open defecation in Ghana with stiffer punishment to change the narrative. Though a novel strategy, governments over the years have developed cool-feet towards eradicating the canker.

The lack of political parties willingness to include and implement  in their manifestos; a road map to ending the menace, making open defecation a performance measure for MMDCEs, providing toilets in all schools, health facilities and at all major highways remain worrying.  Poor enforcement of the building code by assemblies and the disinterest by governments to establish a National Sanitation Authority to swiftly address the canker leaves many Ghanaians wandering if the state really cares about the wellbeing and dignity of her citizens.

Even though government under a Clean Ghana project contracted the Ghana First contractors firm under a public-Private partnership to build 10,000 toilets nationwide but sadly, about 2000 of these toilets are at various stages of completion and in a messy condition.

Again, the woefully inadequate staffing strength of the Rent control departments and Environmental health officers in the country coupled with poor logistics continue to hinder the fight against the menace. As a result, most households or community members are not under any pressure to construct toilet facilities.

In the face of the above, what can be done to end open defecation and avert lack-of-toilets induced diseases and deaths?.

First, citizens must intensify their demands from government to provide sufficient toilet facilities at all public places such as schools, health facilities, markets, state institutions and along major highways.  Championing this campaign through demonstrations, political activism and use of social media will be apt.

Again, citizens should demand a percentage of the assembly’s common fund or internally generated fund (IGF) to support community-led initiatives in constructing toilets.

Second, government as a matter of urgency should establish more sanitation courts in all districts, set-up rent control and environmental health offices with adequate staff in all districts to effectively prosecute perpetrators of open defecation. Convicts should be made to construct toilets within one week and be fined an amount equivalent to constructing a toilet.

Where the convict is a public worker, the court should deduct part of his salary to construct the toilet and for informal sector convicts, they should be used for menial jobs and the proceeds for to build the toilet.

Third, all donors should make sanitation and, particularly toilets coverage, a key consideration in supporting projects or programs in Ghana.

Also, the various assemblies should immediately enforce that all worship places (Churches and Mosques) construct toilets facilities or cease to operate without them. They should also effectively monitor and prosecute persons who flaunt the building code.

Additional communities can contribute through community saving approach (SUSU) to finance the construction of toilets. The police should be assigned the task of conducting swoops in open defecation hotspots or areas for prosecution. This will also serve as a deterrent.

Finally,  the media and citizens should put political parties under pressure to include toilet provisions in the manifestos and be made to account for the stewardship.