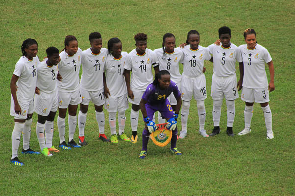 Once again we have painfully lost in our bid for a “HOST AND WIN” project in African football. In 2008 after our 2006 successful debut in the FIFA World Cup, we were inspired to bid for 2008 AFCON in Ghana. Our Black Stars did what was their best but failed to win the tournament.

Thus our investment in the infrastructure in the various stadia, including the Aliu Mahama Stadium, were the only gains left for us.

The trophy and bragging rights went to Cameroon.

And here we are again. Our Black Queens who are touted to be at least the third best women’s national team in Africa could not go beyond the preliminary stage.

We don’t need any coach or technically minded football analyst to tell us that the Black Queens major defect was in the goalkeeping department of the games.

All the goalkeepers were not good but they and their coaches thought they were currently the best in the whole country. Difficult to accept.

The ladies have a league. We cannot accept that from all the female teams in the country.

We have a Normalisation Committee which is mainly engaged in finding solutions to the rot in our refereeing.

Perhaps the committee should also direct its attention to the area of selecting players and their coaches for our national teams.

There have been persistent allegations that monies exchanged hands for coaches and members of management teams for players to be accepted to play.

The spotting and selection of technically competent players should be an easy assignment.

At one time it was alleged that members of management committees were given the privilege of contributing two players each to make up the teams that they managed.

It was part of their bonus.

Surely if we operate and manage our team’s selection and management on this criteria, our football will become stagnant and underdeveloped.

These same club owners were the ones who controlled and ran the football association. They earn fat allowances, including end-of-four year exgratia.

The players they put on the national teams become ready-made merchandise that they sell in the international football market.

And since they may not be the best, their shelf-life is short.

They do very well at under-17 and 20 levels and attract transfers abroad.

And they never develop to feed our national Black Stars team.

Another wicked and selfish strategy has been to ignore and kill Colts Football (colts tournaments).

It used to be that our league seasons were preceded by these tournaments and what was known as gala.

Again, to my mind, the Anas exposé has made Ghana and it’s football an Arena of Fear for the FIFA referees who handle matches in Ghana and even outside.

Perhaps, like our own local referees, the referees were benefiting from corrupt practices.

With the Anas exposure nobody knows whether Tiger Eye PI will record and expose them.

The result is that they are scared and unhappy and handle our matches in biased and unprofessional ways. They want “to show us”.

After all, the referees’ decision is final.

Unfortunately, there is very little we can do about this.

Perhaps one of the bitterest aspects of the tournament and the one in Uruguay is the conspicuous absence of any of our female referees.

The question is, where were our female referees who were not affected by the Anas exposé? Our Normalisation Committee has a lot of cleansing on its hands.

We wish them well.