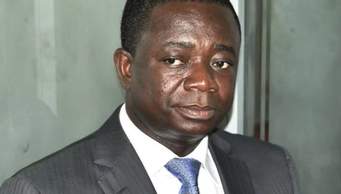 An Accra High Court in Accra has directed ordered the Economic and Organized Crime Office (EOCO), to de-freeze all bank accounts of the former Chief Executive Officer of COCOBOD, Dr. Stephen Kwbena Opuni.

Mr Opuni had gone to court challenge the directive by EOCO freezing all his accounts and as a result of a suit filed by the Attorney General department against him and Seidu Agongo.

In his ruling, the trial judge, Georgina Mensah-Datsa directed that his Standard Charted Bank account and Ecobank Account should be defrozen forthwith.

It would be recalled that Dr Stephen Opuni was relieved of his duties at COCOBOD on January 12, 2017 after a change in government.

He was subsequently hauled before EOCO and subjected to a 6-hour grilling on a wide range of issues, including alleged massive corruption in the cocoa sector after which his passport was seized and accounts frozen

This compelled him to proceed to court to challenge the move and ruling was given in his favour on Monday, April 23, 2018.

The two according to a suit, face-up 27 counts of willfully causing financial loss through to the state through fraud.

Some of the charges include; money laundering, violation of procurement laws and defrauding by false pretenses.

Other portions of the suit read:” Mr. Stephen Kwabena Opuni between November 2014 and November 2015 in Accra in the Greater Accra Region, abetted Seidu Agongo and Agricult Ghana Limited to defraud Ghana COCOBOD of the sum of Ghc 75, 289, 314.72.”

“Stephen Kwabena Opuni on the 10th of October 2014 in Accra, agreed to permit your conduct as the Chief Executive Officer of COCOBOD to be influenced with an amount of Twenty Five Thousand Ghana Cedis (GHc25,000) from Seidu Agongo”.