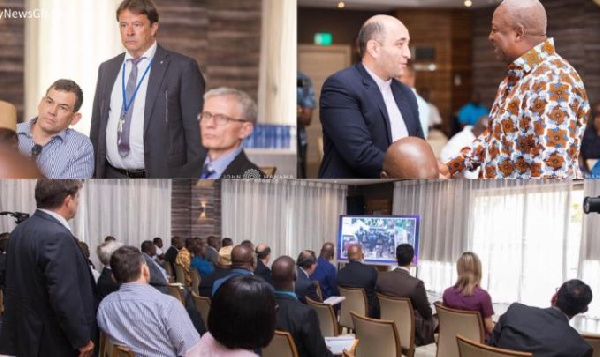 Mr. Mahama met with some diplomats over the Ayawaso West Wuogon election violence

Senior Minister, Yaw Osafa Maafo has viciously attacked Former President John Dramani Mahama for showing the videos and pictures of the violence that occurred at the recently held by-elections at the Ayawaso West Wuogon constituency.

Former President Mahama hosted diplomats at an interaction where videos and pictures of the violence on January 31, 2019, were shown to drum home the point, the Akufo-Addo government is presiding over national insecurity.

The diplomats were shown multiple videos of the barbaric attacks, gun violence, unrepentant admissions of responsibility by a Minister of State at the Presidency, Bryan Acheampong and videos of previous outings of the NPP-aligned vigilante groups, Delta and Invincible Forces.

Describing the act as "shameful" and "unpatriotic", Mr Osafo Maafo said he wondered what the motive of the former president was.

Mr Osafo Maafo said in an interview Joy New explained: "It is because if he gathered Ghanaians, call it Ghanaian professionals, Ghanaian businessmen, and he talked about matters of concern to him, I'll have no problem."He's a former head of state and, therefore, a very important opinion leader. But to gather foreigners and try to paint Ghana black is just not acceptable. What is he really after? What does former president Mahama want to portray? Why does he want to paint Ghana black when, indeed, there’s nothing to paint black?"In Mr Osafo Maafo's view, even though "there was some violence, it didn't happen at a polling station, it happened, as it were, in the parliamentary candidate's house away from any polling station and we're yet to know who even shot", and, so, wondered: "Why would you want this to look like it’s a national disaster?""This really is not good and I will never support such a thing but if you look at what happened in previous by-elections in this country, this is nothing more than what had happened earlier. Somebody drove through a crowd in a by-election in Atewa. What happened?"

Mr. Mahama hosted the diplomats at Peduase and was joined by the National Chairman, Samuel Ofosu Ampofo and General Secretary Johnson Asiedu Nketia of the National Democratic Congress (NDC), the Deputy Minority Leader James Avedzi, a former Minister for National Security Kofi Totobi Quakyi and senior members of the NDC.

The briefing traced the history of the NPP’s introduction of the vigilante groups, their training and the dangerous decision to arm the hoodlums and also clothe them as supposed national security operatives.