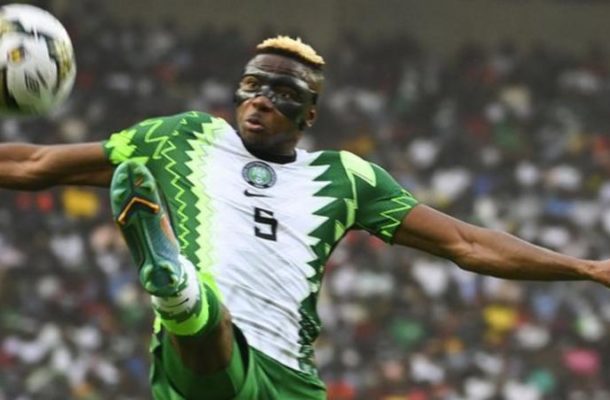 The Super Eagles missed out on a place at the 2022 World Cup in Africa's play-offs in March but have made a perfect start in Group A as they seek a spot at next year's Nations Cup in Ivory Coast.

The victory away from home is the biggest win the west Africans have recorded, surpassing a 10-1 triumph over Benin in 1959.

Watford striker Emmanuel Dennis and Ademola Lookman, who spent last season on loan at Leicester City, were also on the score sheet for Jose Peseiro's Nigeria.

Osimhen, 23, now has 15 goals in 22 international caps, with the Napoli striker becoming only the second Nigerian to score four goals in an international, with Rashidi Yekini the first to do so in a 7-1 Nations Cup qualifier against Burkina Faso in 1991.

Sao Tome e Principe are ranked 183 in the world by Fifa and had to come through a preliminary qualifying tie against Mauritius to reach the group stage.

The islanders were then thrown out of qualifying for fielding an ineligible player - but Sao Tome were subsequently reinstated just nine days before Group A got under way following a successful appeal.

Nigeria join holders Senegal, Algeria, Burkina Faso, Mali and Morocco with two wins from their first two qualifiers, with the next two rounds of matches scheduled for September.

Nigeria began their campaign by coming from behind to beat Sierra Leone 2-1 on Thursday, and Osimhen and Moses Simon did the damage in the first half in Agadir.

Osimhen was set up by Simon for the opener in the ninth minute and returned the favour before the Napoli forward laid on the third for Terem Moffi two minutes before the break.

Nigeria carried on where they left off in the second half as Osimhen grabbed his second three minutes after the restart and Stoke midfielder Peter Etebo netted a powerful free-kick in the 55th minute.

Moffi bagged his second on the hour mark and Lookman quickly made it 7-0.

Oshimen completed his hat-trick in the 65th minute then netted his fourth with six minutes remaining and Dennis rounded off the scoring with an injury-time penalty.

All three designated home sides on Monday are being forced to play outside of their countries because they do not have stadia fit to host international football.

Nigeria lead the group by two points from Guinea-Bissau, who had settle for a 2-2 draw against Sierra Leone on Monday despite leading 2-0 early in the second half after a brace from Jorginho.

But after Sana Gomes was sent off as the hour approached, Augustus Kargbo reduced the deficit before Musa Noah Kamara - who had missed an earlier penalty - atoned when bringing Sierra Leone level three minutes from time.

The game was played in Guinea since Sierra Leone's home stadium is deemed unsuitable to host matches, with Liberia suffering a similar fate when having to play their nominal home game against Morocco in the north African nation itself.

The Atlas Lions made full use of the familiar surroundings when winning 2-0 in Casablanca, after a 56th-minute penalty from Faycal Fajr was followed by a Youssef En-Nesyri strike within 60 seconds.