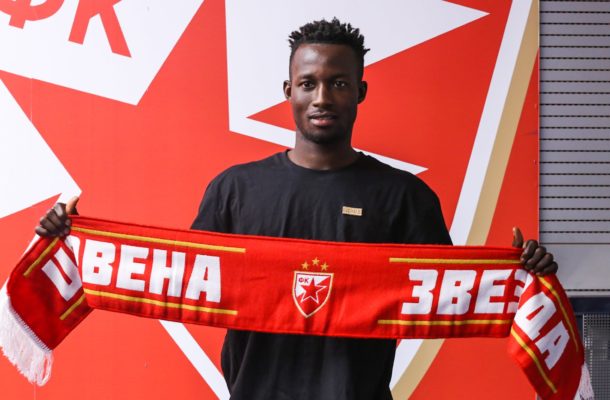 Black Stars winger Osman Bukari has completed a move to Serbian side Red Star Belgrade from Belgium side KAA Gent.

The first Ghanaian to arrive in red and white camp was Haminu Dramani of Ghana, but he was not particularly celebrated. He had a stake in the title won in 2006 under the leadership of Walter Zenge and that was his end in the Red Star jersey.

Later, he even played at the Mundial in Germany the same year and continued his career in Turkey.

He arrived from Heart of Lions F.C. in 2005. A talented 19-year-old attacking full back, he was blighted by various injuries and was restricted to only seven games, but he did manage to score once. He left after just a year he signed for Gençlerbirliği S.K. in Turkey and has later played for Lokomotiv Moskva and Kuban in Russia, Arles-Avignon in France, Gil Vicente in Portugal, Asante Kotoko back in Ghana, Charlotte Independence in the USA’s United Soccer League. He’s still playing at the age of 32, turning up for FC Infonet Tallinn in Estonia. He famously scored for Ghana in their 2006 World Cup win over United States. He made a total of 43 appearances for The Black Stars, scoring four goals.

Mohammed Awal Issah was a member of the Red Star during an inconvenient period for the club. There was neither money nor results in Marakana, the 2008/2009 season ended in third place, and Isah was a footballer for two seasons, doing all that was required of him.

Issah began his career by Real Sportive before signing a two-year contract with AmaZulu in the South African PSL in August 2007.

On 10 October 2008, he went to Serbia for trials with Red Star Belgrade and in December 2008, he signed a 4.5-year contract with the club. In mid-May 2009, AmaZulu contacted FIFA stating they had not received the full transfer fee for Issah from Red Star Belgrade.Later that month, Issah, together with teammate and compatriot Bernard Parker sued Red Star Belgrade for failing to fulfil financial obligations. In January 2011, Issah was one of eight players told they were surplus to requirements. From Belgrade he went to Rosenborg and even learned to a good extent Serbian, which he used well after his stay in Serbia. The next Ghanaian was Lee Addy, a talented stopper from Ghana, who was also predicted to have a bright future in Marakana. Centerhalf, with excellent technique, strengthened the then Cup winner in 2010 and made a great impression in the opening half-season.

But just a year later everything came crashing down like a tower of cards and Addy was more on the bench and the stands than on the field. He followed his departure to China, then strengthened the team of Dinamo Zagreb, and a few years later returned to Serbia and donned the jersey of Cukaricki, where he played only 10 games in his tenure. 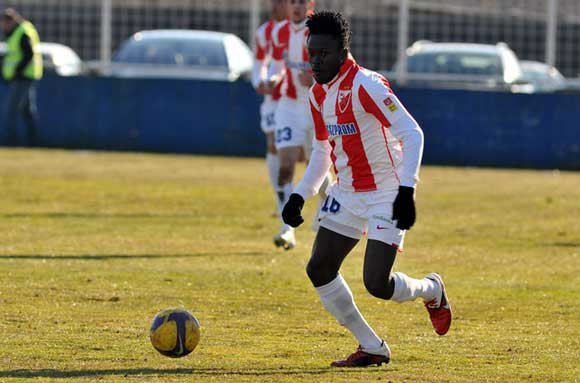 Ghanaian striker Nathaniel Asamoah was a member of the Red and White for a short time. He scored one goal in a couple of matches and was the actor of the famous match in Bordeaux, where the star was unluckily dropped after a penalty in the referee.

was brought to the club back in early 2012 from Asante Kotoko after he’s started out at Wa All Stars. Little striker scored just once in his 19-month spell in Belgrade, failing to establish himself in Robert Prosinečki’s side, totalling 15 appearances. He returned to Ghana with Medeama before going on to join Raja Club Athletic in Casablanca, Morocco and then Ashgold. Abraham Frimpong is also someone who is well known to Serbian football fans. He began his mission in Serbia in Vojvodina, in order to reach the form in Napredak that recommended him to the Star. He arrived in the winter of 2017 and made a good impression in that half season.

With the arrival of Vladan Milojevic, Frimpong had minutes in the starting lineup, but as time went on it was getting weaker, so he started 2018 in a Ferencvaros jersey. Richmond Boakye-Yiadom is a foreigner who is in the Red Star for a third year. He arrived in 2017 and in a short time became what the Star needed - a goalie. He scored in the Eternal Derby, was the hero of the Europa League qualification with as many as 7 goals. He also demolished Cologne in Germany and then stopped.

This was the reason for selling Boakye-Yiadom to China with a serious sum of money. However, he was in Marakana again in the summer of the same year. The star entered the Champions League for the first time, and Boakye-Yiadom returned to where he felt best.

He didn't give the parties he used to cheer for, but it was Boakye-Yiadom and no one bothered him.

He returned to form last summer, where he made an important goal in Copenhagen to hit the "fly" at Marakana for the second consecutive year. He also scored in the Champions League against Olympiakos in Belgrade and managed to do what no one else could.

Rashid Sumaila
He arrived on loan from Qadsia SC in Kuwait. But after only a season his loan spell was not made permanent as he returned to his parent club.

There was a lot of interest from clubs in France, Spain, Turkey, Belgium and elsewhere but the Serbian club beat off competition for their man.

Bukari has signed a four year contract that will keep him at the club until at least the summer of 2026.

He arrived in Serbia on Monday and completed his medical on Tuesday before the club made the official announcement of the speedy winger.

The Serbian giants are keen to qualify for the group phase of the UEFA Champions League next season and see the capture of the Ghanaian winger as a big coup.