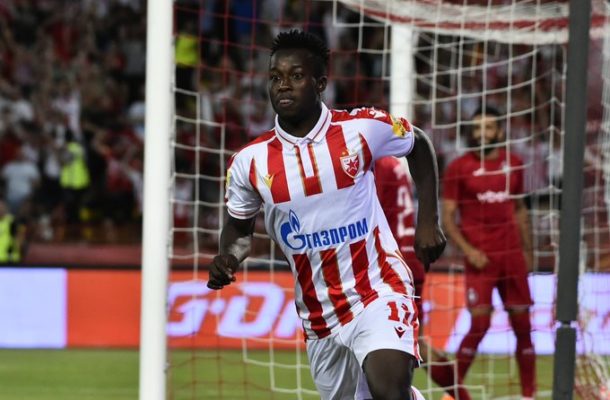 Radovan Pankov who plays for Red Star Belgrade but is currently nursing an injury has heaped praise on Ghanaian winger Osman Bukari for his outstanding form for the club since his move.

According to the player, Bukari must continue to play well and must not but complacent with the numerous plaudits coming his way.

Osman Bukari was the star of the show for Red Star Belgrade in the first leg of the third round of the UEFA Champions League against Armenian side Pyunnik as he grabbed a hattrick in their 5-0 win.

The Serbian side also won the second leg by 2-0 as they progressed 7-0 on aggregate with Belgrade pocketing 12,000,000 euros.

The former player of Vojvodina and Radnicki from Nis wants Osman Bukari to continue with the games he has been showing since coming to Zvezda.

"Surely everyone is raising him to the heavens, which is normal, but he has to continuously play well and then I will say well done and congratulations. Ivanić and Katai have been a little short lately, even though they have been demonstrating top quality for years. Zvezda is being scouted and closed by on the left side, but those two are playing great, now Bukari is a revelation to opponents because of his speed, we'll see how he looks later when he's scouted."

Bukari since joining Red Star Belgrade from Gent has scored five goals in six matches in all competitions.