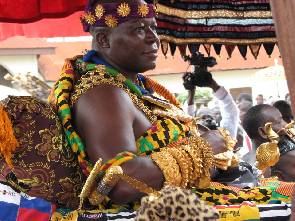 Kapital Radio’s source close to the Kumasi Metropolitan Assembly has revealed that the Asantehene Otumfuo Osei Tutu II has decided to intervene in the protracted KMA impasse to get Kumasi a Presiding Member to enable the Garden City fully function.

The source says all assemblymen of Kumasi met the King and Kumasi Traditional Council at Manhyia on Saturday 8th October where they agreed to unanimously approve the candidate that will be proposed or suggested by Manhyia.

Kapital News is reliably informed that there will be a session come Thursday October 13, to confirm the soon to be proposed candidate.

On #InTheCity, Kapital Radio’s Midday Bulletin, the Honourable Assembly Man for Fankyenebra, James Nana Prempeh, who doubles as the Secretary to all Assembly Men at KMA, confirmed to Kapital Radio’s Lily Ampofoa Annor that the assembly members indeed met with and collectively assured the Asantehene and his Traditional Council that they will respectfully approve of any Assembly Member put up for the position of Presiding Member by the King. He also confirmed there will actually be a meeting on Thursday to approve the candidate they are yet to disclose.

Hon Nana Prempeh also noted that both Opooman and Michael Edusei will be dropped and a completely new candidate nominated by the traditional council. According to him, they will only vote to approve the new candidate using a simple Yes or No vote.

But further checks by Kapital News indicate Nana Amakomhene stands out among probable candidates whose names are up for critical consideration by the Kumasi Traditional Council.