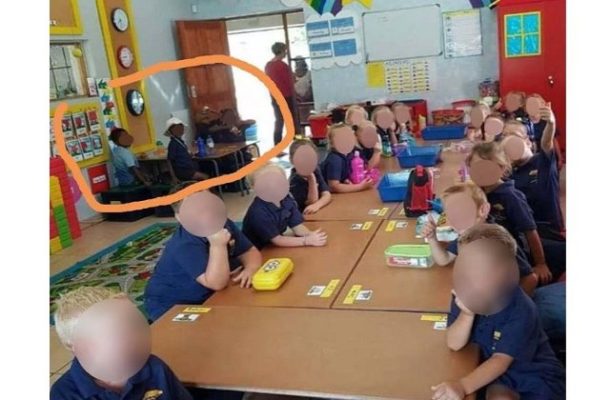 A South African primary school teacher was suspended on Thursday after a photograph appeared to show black children sitting separately from white children in a classroom, sparking a storm of racism accusations.

The pupils were attending their first day at the Schweizer-Reneke school in North West province, and the teacher had taken a photograph to send to anxious parents.

It rapidly spread on social media as it showed about 17 white children sitting around a large table, with four black children around a small corner table in the background.

"From the information I got from the meeting, it seems that there are a lot of cases here of racism," provincial Education Minister Sello Lehari said after visiting the school.

"I will send a team to do an investigation into all schools... to deal with issues of racism in totality," Lehari said.

Student activist Mcebo Dlamini wrote on social media the "most provoking" aspect of the image "is not that black kids are ostracized from white kids, that is common in our supposedly post-apartheid Africa", South African news website TimesLIVE reported.

"Rather what becomes painful is that there are black people who still insist that racism has ended and who think that blacks and whites can have peaceful relations that do not have undertones of racism".

"We saw the photo and we were also angered by what we saw," Jozeph du Plessis, chairman of the school's governing body, told the eNCA television channel.

"The kids were quite unsettled - you must realise they were five years old on their first day at school - and she grouped them in a way she thought would settle them quickly and comfort them.

"There was no intent of racism or segregation from the teacher's side.

"We are investigating - perhaps it could be a language issue, perhaps those kids are not speaking Afrikaans, but I can't speculate."

Some white parents on Thursday took their children from the school after protesters gathered outside.