Oversized manhood scares girlfriend out of a relationship 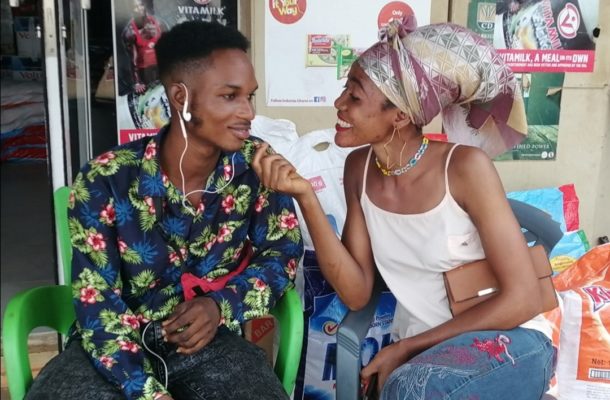 So what’s supposed to be a blessing now a curse? Indeed, wonders shall never end.

When people are being punished for crimes they have committed, his only offense is being endowed with a big manhood.

Frank Azorliadey, 22, a very fine looking chap, a native of Keta in the Volta Region, who currently resides in Sowutuom, a suburb of Accra has been sharing his pathetic love story which broke the hearts of many.

Frankie, as he’s popularly known narrated that his woes began on a day his lover dumped him for another man after she discovered his big-sized penis.

"Adwoa and I have been dating for the past two years without sex. But just recently when we tried to do it and upon zipping off, the moment her eyes caught hold of my manhood, she got frightened and shouted 'no, no, I can't take this' and she quickly pushed me away and left, that was all".

According to him, all attempts to whip her back in line has proved futile after several of his calls went unanswered.

“I’m really surprised, my sweetheart no longer wants to see me and does not entertain my calls anymore”, beleaguered Frank said.

Just like Romeo and Juliet, Mr Azorliadey was utterly shocked due to the sudden change in attitude of his "Juliet". So what happens to the love both of them shared in the past.?

The once vibrant chap who is now broken-hearted says he could not fathom the reason why just a look at his manhood could provoke his lover to desert him.

He’s currently on a mission to find answers and wants people who can volunteer with information to quickly get in touch with him.

To be endowed with an impressive manhood is every man's pride and every woman's favourite too.

Often boys or men who are gifted with such huge penis are considered blessed by all standards. Naturally men who own bigger dicks automatically become the favourite of women and are loved and adored.

This is an assertion majority of women in Ghana and elsewhere can attest to without mincing words.

Some women and girls are of the view that when it comes to penises, whether bent, curved, thick, slim, big head, small head, circumcised or not circumcised-there’s plenty of variety to be enjoyed.  But to be honest, you’ll struggle to find a woman declaring her love for the micro-penis.

When the Frank’s issue broke out, some reporters of the Human Rights Reporters Ghana (HRRG) have been digging to unravel the mystery behind what makes a good penis and why?.

Out of ten (10) women and girls spoken to, eight (8) of them who spoke on condition of anonymity admitted to having enjoyed good sex with men who wields big penis.

One of them profoundly declared: “when it comes to good sex, there's absolutely nothing that makes me happier in life than being in bed with a man who owns the “Anaconda" (big-sized penis) to make me feel like a woman".

Taking all the above into consideration, we can conclude that majority of women tend to enjoy men with big penis more than those with smaller sizes therefore Frankie’s case is just an exception and our hearts really go out to him at this time.