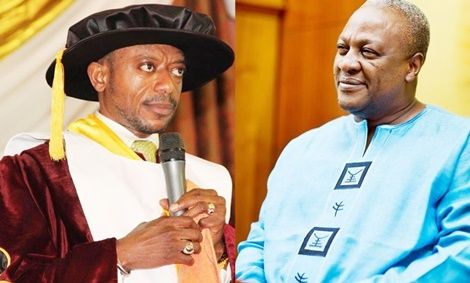 Founder and President of Glorious Word Power Ministry, Prophet Isaac Owusu Bempah, is said he will quit being a pastor should Former President Mahama win the 2020 general elections.

According to the personal pastor of President Akufo-Addo, God has revealed to him several times that Former President Mahama will never ascend the highest office of the land.

Speaking in an interview on an Accra based radio station, Rev. Owusu Bempah said; “No human being can change what God has said. I respect former President Mahama but God says he can never be President of the country again. He has been helpful to Ghana; he’s done what he can so I wish him well in all his endeavors. But to become the President of Ghana, it will never happen,”

Rev Owusu Bempah who had earlier accused Mr. Mahama of "soiling himself with innocent blood" stated that God has already rejected the former president.

Adding to avoid incurring God's wrath, he or any other man cannot change what God has already ordained, stating; “I can’t change what God has said, if I do, God will punish me and I can’t stand His punishment....I might even quit....Mahama can never be President again in Ghana until thy kingdom come.”