Pakistan threatens to destroy India in terrifying war of words: "We have not made atomic device to display in a showcase" 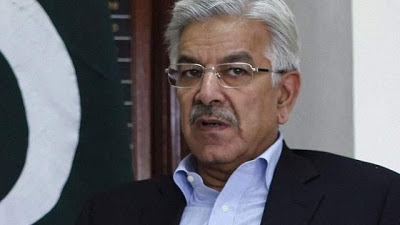 Arch enemies - Pakistan and India who both possess a formidable nuclear arsenal - threaten the safety of the world as the former ramped up the threats against its neighbour.

In a fresh anti-India tirades, Pakistan’s Defence minister, Minister Khawaja Asif, threatened to use nuclear weapons in case of war against India, after it confirmed it had launched a series of “surgical strikes” against suspected militants sneaking across the border.

"We will destroy India if it dares to impose war on us. Pakistan army is fully prepared to answer any misadventure of India" Asif told a private TV channel SAMAA, on September 26th,  in answer to question about India's intention to carry out surgical strike in Pakistan.

"We have not made atomic device to display in a showcase. If such a situation arises we will use it and eliminate India" he added

His salvo came in the wake of assault on an Indian army base in Uri. Four heavily armed militants infiltrated an Indian military base in Kashmir earlier this month, managing to break through the disputed Himalayan border, where they opened fire, killing 18 soldiers and injuring scores more

In response to the killings, Prime Minister Modi said: "I want to tell the Pakistani people: India is ready to fight you. If you have strength, come forward and fight against poverty. “Let's see who wins, who is able to defeat poverty and illiteracy first, Pakistan or India?"

The two countries have observed a ceasefire since 2003, but the peace is fragile and the latest escalation between both parties could lead to all-out warfare. Both India and Pakistan claim Kashmir as their own sovereign land, and have fought three wars over the territory since gaining independence from the British in 1947.

Meanwhile, India has said it has evidence showing involvement of Pakistan-based terrorists in the Uri attack and demanded that Islamabad refrain from supporting and sponsoring terrorism directed against this country.

The minister claimed that the entire world knows now that India is not as serious about resolving the Kashmir dispute as Pakistan is. He claimed India has not received support from anywhere despite launching a diatribe against Pakistan and added that China had, on the other hand, supported Pakistan's viewpoint.

Also commenting on a bill moved in the US Congress to label Pakistan as a terrorist state, he said that anti-Pakistan elements are present in each and every country but the impacts of their voices depend on the policies of these countries.

"Five or 10 voices raised against us are not enough evidence to declare Pakistan a terrorist state," he said.