Palestine through after thrilling win over Lebanon 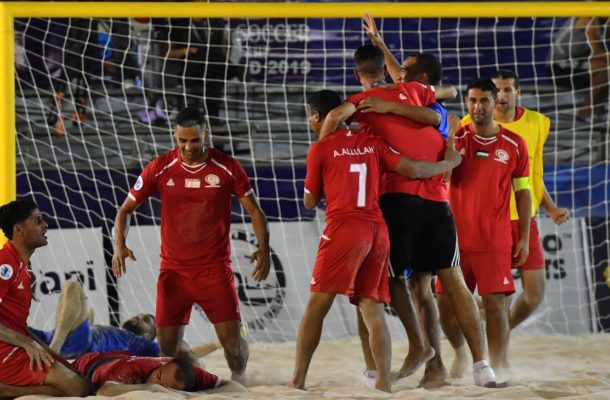 
A Mahmoud Al Neirab spot-kick eventually sealed the close-fought win, which keeps Palestine's dual dreams of the Asian title and a place at the 2019 FIFA Beach Soccer World Cup alive.

The result spells the end of the competition for Lebanon, whose dream of a first-ever World Cup berth is deferred for at least two more years.

Jaber made regular early saves, but he was punished when he let another of Merhi's efforts spill, with Haitham Fattal following up to force the ball home in the 11th minute, and give Lebanon a 1-0 lead at the first break.

Fadi Al Arawi struck back for Palestine just seconds after the restart, knocking in a loose ball following a corner to level the match, and Ahmed Allulahi had a strong free-kick saved by Mohamed Choker, as Imadeldeen Hashim's side enjoyed their best spell of the match.

Merhi was rewarded for his continuous efforts when he slammed in a fantastic drive to restore Lebanon's lead in the 18th minute, but it only lasted 120 seconds, with Islam Abuobayda tapping in for Palestine after another Al Arawi attempt was dropped.

With so much on the line, the atmosphere was tense, and Palestine had to do without head coach Hashim for the final 10 minutes after he was sent to the stands by match officials.

Fattal stuck what appeared to be a major advantage for Lebanon with eight minutes remaining, rocketing in a low free-kick for his second of the match and sixth of the tournament, but Palestine once again hit back, this time through Maisara Al Bawwab, less than 20 seconds later.

Allulhai pulled one agonisingly wide with five minutes remaining, and Al Bawwab crucially deflected a goal-bound effort over the crossbar, before seeing a free-kick of his own superbly saved by Choker with three minutes on the clock.

The match was effectively decided with 90 second remaining, when Palestine were awarded a penalty after Choker was judged to have fouled; an opportunity Al Neirab never seemed likely to pass up, and he duly converted to seal a historic win for his country.

Palestine now face Japan in the semi-final, while Lebanon's campaign ends at the quarter-final stage.

"Our head coach studied their team after watching the previous Lebanese matches. We had a good preparation for this match and we played well. The players were committed and did very well during the match. We want to go to the final."

"It was a very difficult game for us. It was not easy. Palestine had many strong players from football. We had many, many chances to make goals, but we didn't take it. I congratulate the Palestine team."Source: the-afc.com