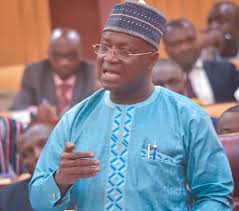 Majority Leader of Parliament, Osei Kyei-Mensah-Bonsu has said parliament will pass appropriate laws that will facilitate the implementation of policies leading to the attainment of the Sustainable Developmental Goals (SDGs).

He explained that even though the Executive is mainly responsible for the implementation of policies leading to the attainment of SDGs, parliament, being the institution responsible for passing laws, policy oversight and budget approval, is a key partner uniquely positioned to influence the shape and content of the national development agenda and ensure the implementation of the SDGs.

He added that increasing the knowledge of parliamentarians on SDGs and Agenda 2063 targets through workshops, seminars and international conference is vital towards the attainment of the SDGs.

The majority leader was speaking at the launch of Ghana’s Sustainable Development Goals Indicator Baseline Report 2018 in Accra yesterday.

The maiden report sets the baseline for selection of indicators that serve as the basis for monitoring and tracking of progress towards the achieving the SDGs and the corresponding Africa Union’s Agenda 2063 targets.

Presidential Advisor on SDGs, Dr Eugene Owusu stated that there was the need for Ghana to address inequalities and priorities of the marginalised groups so as to leave no one behind.

“And above all, we must succeed in empowering communities and citizens with the knowledge of the SDGS so they can use the SDG to demand accountability from their leaders at all levels,” he stated.

He noted that the President is championing the development of the goals and committed to the unleashing of the potentials of the youth in achieving the SDGs.

Minister for Planning, Professor George Yaw Gyan-Baffour, launching the report, said government is committed to collaborate with international partners in achieving the goal.
He said government has taken steps to inculcate the goals into the African Union Agenda, adding that Ghana would be reporting on what the country had done next year.

In September 2015, world leaders adopted the 2030 Agenda for Sustainable Development, together with a set of 17 goal and 169 targets as the successor framework to the Millennium Development Goals (MDGs).

Ghana’s significant achievement recorded under the MDGs and its active involvement in the preparation and adoption of the SDGs earned it a significant recognition and relevance among the comity of nations.

This acknowledgement earned Ghana, the nomination of the President, Nana Akufo-Addo, as co-chair of the SDGs Eminent Advocates.