Peki SHS bursar, driver in the grips of the Police for using foodstuffs to 'bribe' auditor 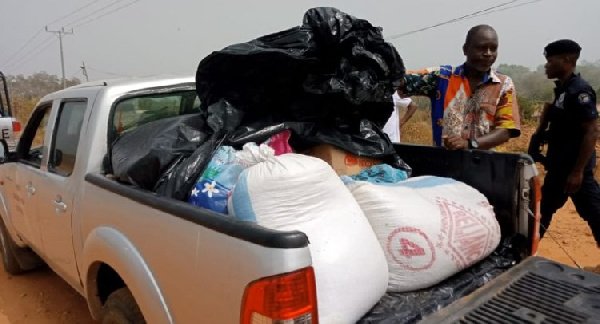 Some pictures of a pick up truck loaded with food items meant for the Peki Senior High School has been making rounds on social media recently.

Those food items were reportedly meant for use by the school's kitchen but were being diverted to grease the palms of auditors.

This has lead to the arrest of the said auditor, the bursar of the Peki Senior High School and the driver who was conveying the said items to the auditors house.

The three suspects are in the grips of the Volta Regional Police Command for allegedly stealing food items meant for the school.

A pick up truck was loaded with food items to the brim and was allegedly being transported to the house of a staff of the Ghana Audit Service.

The said items include canned tomato paste,milk,bags of rice,corn,maize,beans and containers filled with cooking oil.

Other items that were retrieved includes exercise books labeled with the logo and name of Peki Senior High School among others.

It is reported that someone stepped on the toes of the Deputy Volta Regional Minister Johnson Avulete who quickly intercepted the items and directed them to the Regional Police Command.

The suspects that is the auditor and the bursar who are yet to be identified turned themselves in and are assisting the Volta Regional Police Command in their investigations.

The Deputy Regional Minister, Mr. Johnson Avulete in an interaction with a cross section of the media  warned that such behaviour will not be tolerated and has issued a warning to persons involved in such shady deals to refrain from them.