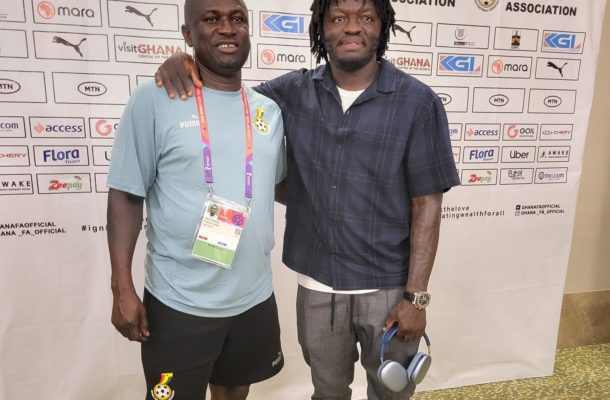 Eight years down the lane after that hot slaps in  Brasilia, Sulley  Muntari has now mastered the courage to publicly apologize to Moses Armah Parker.

The Black Stars were on the brink of elimination at the  2014 FIFA World Cup after losing 2-1 to the USA and drawing 2-2 with Germany, Ghana needed a win against Portugal and results going their way to progress from the group.

But players of the Black Stars were agitating for their appearance fee of $100,000 which had failed to hit their bank accounts.

It was during this melee before the Portugal game at the team's hotel that Sulley Ali Muntari landed some hefty slaps in the face of Medeama owner Moses Armah Parker who was then a member of the Black Stars Management Committee.

He has not played for Ghana since 2014 when he was ousted from the Black Stars camp after slapping Medeama President Moses Armah Parker at the 2014 World Cup in Brazil.

A somber-looking Sulley Muntari in a recent interview with Dan Kwaku Yeboah TV rendered a groveling apology to the Medeama owner for his indiscretion eight years ago in Brazil.

"I don’t disrespect elders so it will take a lot of things for me to react unfortunately, he was sitting in front of me and things got really bad. Immediately it happened, and I felt really bad,” he told Dan Kwaku Yeboah TV.

"I wasn’t thinking just about him but his daughter, his family, his wife, and all those things. It’s not right for someone to disrespect their father. I’ve looking for him to apologize to him for my behavior at that time but I have not seen him yet.

“I never had the chance to talk to him but I don’t think I had problems with him during the World cup. It was a pile of a lot of things that led to me bursting out. I’m someone who doesn’t talk and when I work, I work really hard," he added.