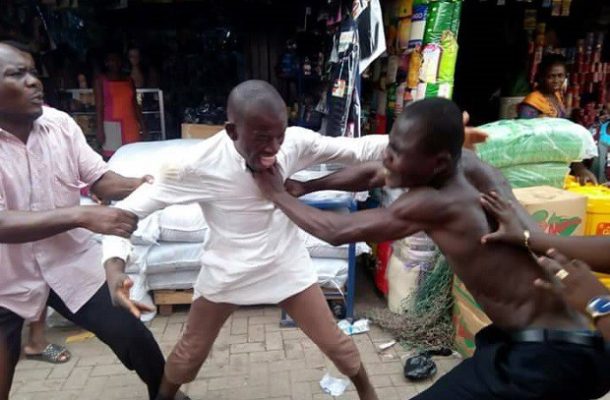 The greed invading churches in Ghana took a bizarre twist when two street preachers in Kumasi exchanged blows in the full glare of the public over the sharing of monies they had accrued as offertory.

Despite preaching against the devil, the two street preachers allowed the root of all evil to get the better of them at the Kumasi Central Market on Saturday.

Evangelist Samuel Kwame Boateng and Evangelist Kwame Poku reached a serious point of disagreement over how they would split the money they got from donations from believers.

They failed to exhibit their Christian ethos when their bickering became a loud argument before Evangelist Boateng (in white rob) struck the first blow directed at the head of Poku.

A charged Poku went shirtless before replying with a serious of unanswered blows which landed on the target with the crowd at the busy market witnessing and cheering.

The watching public had to separate the fight before the police invaded the vicinity to restore sanity.