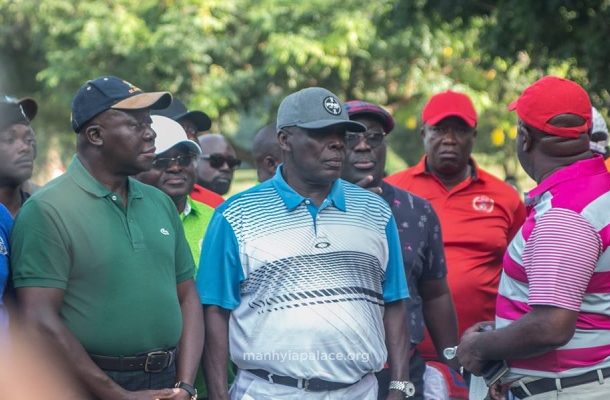 The Okyehene Osagyego Amoatia Ofori Panin II has been playing golf  with the Asantehene Otumfuo Osei Tutu II as part of activiies to mark his historical visit to the Manhyia palace.

The perceived traditional rivalry between the Asantehene and the Okyenhene appears to have been broken as the two influential leaders have been seen together in images shared online.

"Asantehene is being joined by the Okyehene to tee off as part of the opening ceremony", a post on Manhyia Palace’s Facebook page said on Saturday, 16 July.

Earlier, the paramount chief of the Akyem Abuakwa Traditional Area met the Asante monarch at his Manhyia Palace in Kumasi, capital of the Ashanti Regional.

It is also unclear what the two respected traditional monarchs discussed.

The tension between the two got to a head in May this year when the Asantehene exploded in anger over an alleged attempt by the Executive Secretary to the President, Nana Asante Bediatuo; and Mr Gabby Asare Otchere-Darko, a relative of the president, to undermine him (Otumfuo).

There has been some sort of long standing aggression not on their part per se but the people they represent.

But it is expected that the gesture today will be a mechanism of healing one of the oldest open chieftaincy sores in history in the Akan ethnic setup.