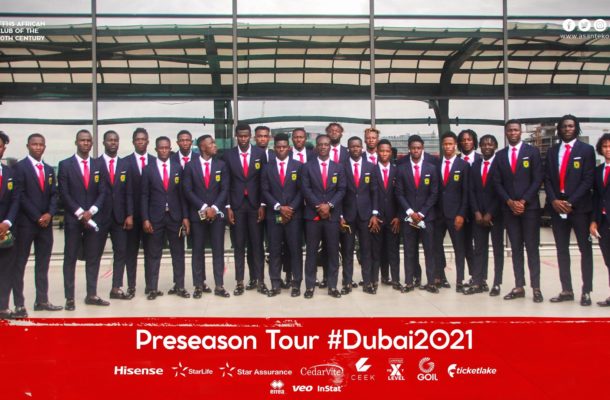 Kumasi Asante Kotoko have arrived in Dubai after departing Ghana on Thursday night for a pre-season training tour in the Gulf Region.

After about by airborne for over six hours, the porcupine warriors arrived in Dubai in the wee hours of Friday 8th October, 2021.

The club have named a squad list of 25 players who are traveling for the trip with a mix of some old players and recently acquired making the list.

The club had already been in Accra training as they prepared their documentation to the popular holiday destination where they will be for pre-season training between 7th - 22nd October 2021 before starting the 2021/2022 campaign on 29th October.

The club have been very busy in the transfer market as they bid to correct the wrongs of last season after ending the season empty handed as they failed to win the Premier League and also were eliminated from the MTN FA Cup at the semi final stage.