Photos/video: African woman murdered in India during argument over money for sexual favour

An African woman said to be a commercial sex worker was brutally stabbed to death by a young man allegedly over a trivial row at her house in Kothanur, Bengaluru, India in the early hours of Thursday, February 2nd.

The deceased identified as Florence Nakayaki from Uganda, had met Ishan, a student and native of Himachal Pradesh, at MG Road and later took him to her house in Thimmegowda layout allegedly for sexual favours after he promised to pay her Rs. 5,000. 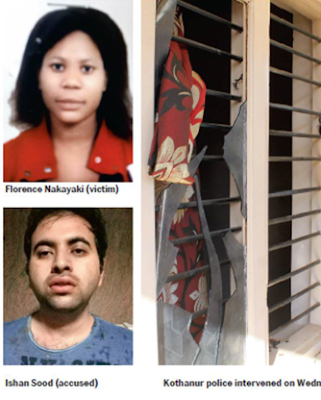 According to the police, Florence soon after reaching home had demanded Rs. 10,000 and threatened Ishan at knife point. Heated arguments ensued and took an ugly turn when Ishan snatched the knife and stabbed her to death.

Residents who heard the commotion alerted the police. Bagaluru police inspector Anjan Kumar, who was on night duty, rushed to the spot to investigate. But a group of African nationals, who had gathered at the spot by then, attacked Mr. Kumar.

Additional police rushed to the spot and arrested Ishan and another African. The case is currently under investigation.

Watch the video below...