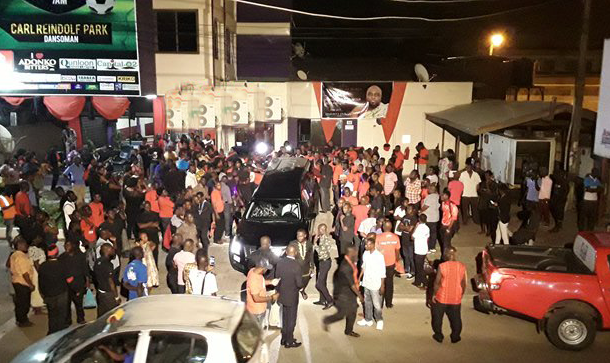 Staff of the Multimedia Group have gathered in their numbers at the forecourt of the company awaiting the arrival of the mortal remains of late broadcaster, Kwadwo Asare Baffour Acheampong (KABA)

KABA passed away after he was rushed to the Korle-Bu Teaching Hospital after his sugar level shot up early Saturday but unfortunately could not make it back home alive.

Before his unexpected death, KABA was the host of Asempa FM’s ‘Ekosii Sen’. He was noted for his many anti-corruption campaigns.

He was recently awarded as the Best Talk Show Host in the 2017 edition of the Radio and Television Personality (RTP) Awards.

The late KABA tied the knot somewhere last year with Class FM’s Valentina Ofori Afriyie and they have a daughter together.