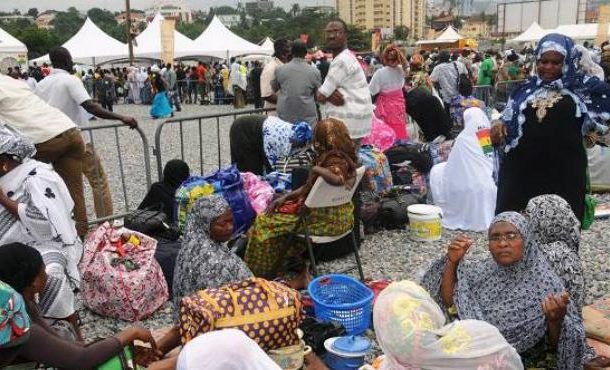 The first batch of Ghanaian pilgrims, from Saudi Arabia touched down at the Tamale Airport yesterday.

The 500 Pilgrims were received symbolically at the Tamale Hajj Village (Jubilee Park) by family members and well wishers including curious persons.

Earlier, such well wishers and others had been advised not to go to the airport as the pilgrims would be bused from the airport to the Tamale Jubilee Park after the completion of arrival formalities.

Before their final movement to the Pilgrims Aiport in Jeddah, the Chairman of Accredited Hajj Agents Association of Ghana, Alhaji Issah Umar Meishinkafa and some executive members paid a working visit to the weigh-in center for pilgrims scheduled for the 3rd flight which is expected to fly from Jeddah to Tamale on Saturday September 24.

Alhaji Issah who was accompanied by his Vice Chairman, Alhaji Inusah Dagomba Boy, Alhaji Alhassan(PRO)and other members, was very excited with the current smooth process.

He attributed the current development on the past experiences and the cordial working relationship between the PAOG and his Association.

He commended the team of officers on duty for a good job done so far and urged them to be extra patience in their line of work because as frontliners they are expected to meet people from different backgrounds with different behaviour and attitude.

Alhaji Awudu Ibrahim who is the head of the weigh-in team, expressed gratitude for the surprise visit at the time that contribution of stakeholders such as the Agents is very much needed. The pilgrims always feel excited when they see their Agents at such places.

Management of pilgrims' luggage which include in large part, souvenirs and personal belongings including those for sale is critical in the Hajj exercise.

The luggage were moved to the Jeddah International Airport before the movement in buses of the pilgrims scheduled for the first Tamale airlift which touched down yesterday.