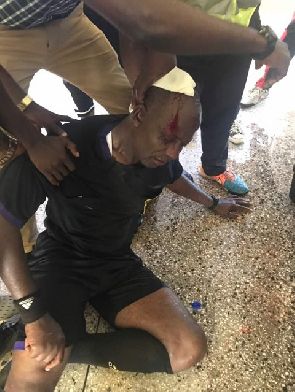 The Premier League Board (PLB) has condemned the alleged attack on Referee Nuhu Liman by fans of Elmina Sharks, during the Elmina based side’s match week 8 game against Medeama Sporting Club on Wednesday.

Liman was allegedly hit in the forehead with a stone, which caused deep cuts and a subsequent loss of consciousness.

The incident caused the game to be abandoned, and the PLB has referred the matter to the Disciplinary Committee of the Ghana Football Association.

The Premier League Board (PLB) learnt with shock, circumstances which led to the abrupt end to the Ghana Premier League Week 8 match between Elmina Sharks and Medeama SC at the Nduom Sports Stadium in Elmina.

The circumstances which led to the injury to centre referee, Nuhu Liman and subsequent end to the game, were quiet unfortunate. While expressing our profound sympathies to referee Liman, as well as our well wishes, we condemn in no uncertain terms the sad development.

Following receipt of the official match reports from all designated officials including referee Liman, the PLB has, in accordance with the GFA statute, referred the matter to the Disciplinary Committee of the GFA.

The PLB is extremely concerned by the brazen display of violence by hooligans at some league centers. While most of the matches played so far have passed without acts of violence, the few reported cases of despicable attacks on match officials are of great worry.

The GFA/PLB does not, and will not countenance such acts, which do not only bring the game into disrepute, but also place lives in great danger.

We wish to remind all stakeholders of their duty to protect the sanctity of the game by conducting themselves in a responsible manner.