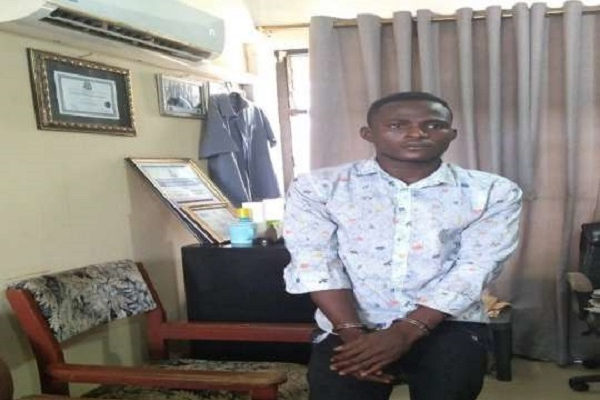 The Bono Regional Police command have arrested a 24-year old alleged notorious armed robber who had been on a Police wanted list for about a year now.

Abdulai Karim alias JJ, the suspect, who is a resident at Yawhima near Sunyani was said to have attacked, robbed and rape his female victims at their residence in Sunyani and its suburbs.

Deputy Commissioner of Police (DCoP), Bono Regional Police Command, Godfred Owusu Boateng told the media at a press conference on Wednesday, that the suspect had been robbing victims of their laptops, television sets, home theatres, mobile phones, sums of monies and other valuable items with a knife and sometimes at gun point.

He said Karim often enters peoples’ rooms through windows, main entrances and that sometimes, he would turn off the main switch of the victims’ electricity power and lured them into their rooms, threatened them with knifes and rape them.

DCOP Boateng said the police became alarmed about the numerous reports and had been working hard to get Karim until his arrest on February 23, 2020 at his hideout at a hotel in Sunyani.

He said Karim admitted to the crimes upon interrogation and had since been remanded into prison custody by a Sunyani District Magistrate court to assist in Police investigations and to reappear again in court on March 17, 2020.

DCOP Boateng said the Police retrieved the gun which was alleged to have been stolen by the accused.

He said the accused has been identified by 11 female victims and a man during a police identification parade.

He appealed to all who have fallen prey in the hands of Karim to report to the Police to assist in investigations.