Police officer donates his salary to the physically challenged 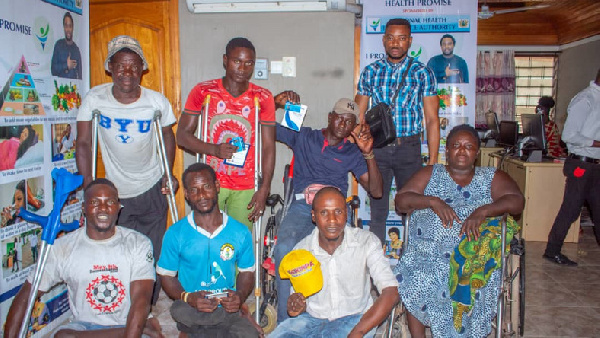 The benevolent presented the government's Health Insurance cards to the beneficiaries as part of his good works to humans.

Lance Corporal Agbeko explained that most people especially the aged in the constituency have not registered with the National Health Insurance Scheme (NHIS) mainly because they did not have the money to do that.

As a result, he said, to put to an end the growing number of people, who come to him to pay their medical bills.

He stated that as most of the people depended on the NHIS to access health care, he decided to use part of his salary to embark on this exercise.

The police officer who has won admiration for using his resources to repair a damaged traffic light and also donates wheelchairs to random physically-challenged persons on the streets urged the people to register for the scheme and commended the beneficiary communities for their zeal during the exercise.

Simon Agbeko also described these charitable acts as a manifestation of divine directions from God, which he receives in his dreams. The police officer further pointed out that, every citizen must do something for his or her country.

He also donated a pair of crutches to the physically challenged persons and gave each of the beneficiaries an undisclosed amount of money.

He charged Ghanaians to give out to the poor and the needy in the society, adding that, he'll embark on health projects in this year.