Police reveal why Aduana defender Farouk Adams is in their grips 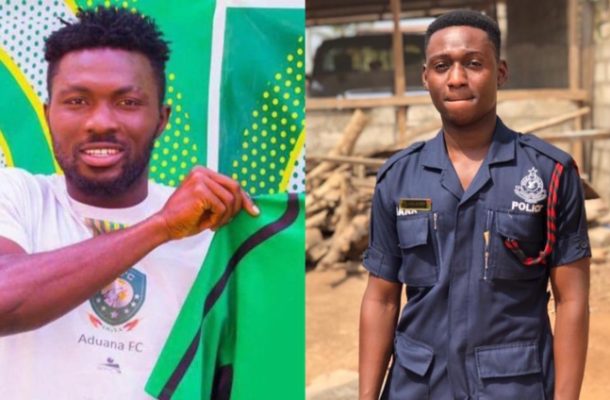 The Ghanaian football public was taken aback when on Tuesday evening new broke that formidable Aduana Stars center back Farouk Adams had killed a Police officer with his car.

Adams is said to have knocked down the Police Officer late on Monday night at the Asuotiano - Berekum road killing him instantly.

The young constable known as Amos Mattey of the Wamfie Police station, was said to have left his duty post to purchase something but never returned until he was found dead Tuesday morning in what is suspected to be a hit and run by the Aduana Stars defender with a red Toyota Camry vehicle with registration number GW 5882-17 which he was driving.

Upon hitting the officer with his car , the player sped off without trying to take the Police officer to hospital till he was found dead in the bush nearby on Tuesday.

The Wamfie District Police Commander, DSP Francis Akwasi Asante has in an interview with Kumasi based Hello FM revealed why the center back is not training with Aduana Stars but is rather in Police custody.

“What happened was that he parked his car at the Goil Filling Station and went to Dormaa East Hospital at Wamfie for medical treatment. This was because he said he had a cut on the ear after the incident. That’s why there are plasters on his ear”

“From the hospital, if he had reported that something had happened we would have rushed to the place to take him(police officer) to the hospital”

The Player has this morning been arraigned before the Wafie District Court but his plea was not taken as the case has been referred to the Sunyani High Court for trial while the accused has been remanded.