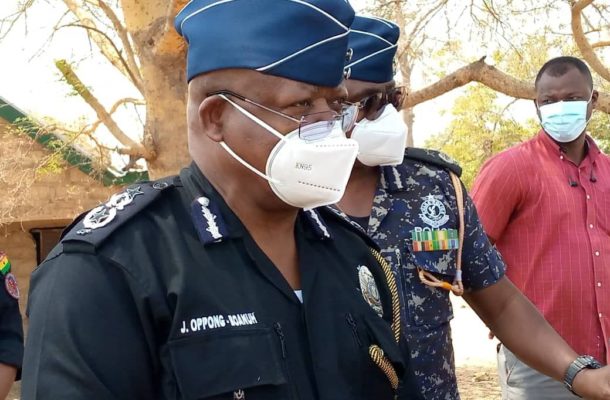 The Inspector-General of Police (IGP), Mr James Oppong-Boanuh, has said the police will deploy more resources in the northern part of the country to help combat crime there.

He said rising criminal activities in that part of the country were of much concern to his outfit, for which reason efforts were being made to arrest the situation.

Mr Oppong-Boanuh gave the assurance at Pusu-Namongo in the Talensi District in the Upper East Region after a working visit to some crime zones in the area yesterday.

The visit was necessitated by the increasing number of criminal activities in the area, particularly highway robbery, during which some passengers and drivers have been killed and their belongings taken away.

The situation led to public outcry, especially among traders in tomatoes who often transport the produce from Burkina Faso through Bolgatanga to Accra.

The traders recently resorted to demonstrations against the activities of criminals in the Bolgatanga municipality as well.

Mr Oppong-Boanuh explained that his visit to the region was to deliberate with the regional, divisional and district police commands on how to put concrete measures in place to tackle the crime situation.

“I did not come alone; I came with the Director-General of Operations and other senior police officers and we are going to sit down with the commanders and re-strategise to see what measures to put in place to ensure that these negative activities do not recur,” he said.

The IGP said although the police command in the region had already implemented some measures as part of efforts to fight crime, the plans would be reviewed and necessary assistance and equipment made available to ensure that they worked effectively to protect lives and properties.

“We are assuring the public that we are doing whatever we can to ensure their safety,” he added.

The Director in charge of Public Affairs of the Police Service, Superintendent Mrs Sheilla Kessie Abayie-Buckman, admonished the public to always volunteer information to support the police in their operations.

She said policemen had started escorting vehicles, including those carrying tomatoes, which had become the target of criminals in recent times.

She further advised traders’ associations to ensure that their vehicles moved in groups.

The IGP and his entourage also visited Bolgatanga, Sandema and Navrongo, all in the Upper East Region.

He is expected to end his tour of the area tomorrow.