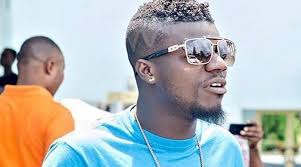 Shatta Wale yesterday rendered an unqualified apology over the leaked video which captures the genitals of a man being sucked by a lady posted on his Snapchat platform.

The Zylofon Music signee who made a U turn after a media outburst earlier maintained he is not the person in the video.

The multiple award winning artistes in respect of his own brand and the reputation of the product brands he represents; Book Baker Beef and Kasapreko’s Stormz Energy Drink, urged the public to pardon him for such unpleasant exhibition.

In disagreement to the apology, Pope Skinny who happens to be a friend of Shatta Wale has blasted Shatta Wale for apologising to Ghanaians.

According to Pope Skinny who doubles as radio personality and rapper, said they get their 'd**ks sucked by slay queens on daily basis', therefore, there’s no need for the apology.

“WHY SOULD A NIGGA APOLOGIZE FOR GETTING HIS DICK SUCKED. WEY SHIT THAT. WE GET OUR DICK SUCKED ALL DAY EVRRYDAY. M3Fa Ohia Enka Nkwasisem”, Pope Skinny posted on Twitter.