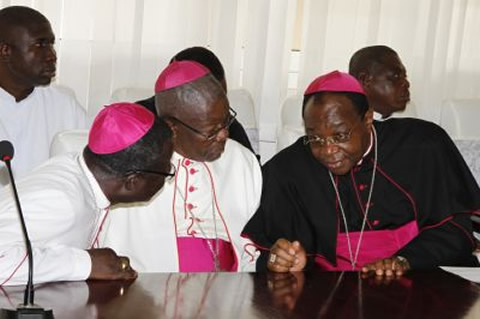 The Ghana Catholic Bishops’ Conference has said there is a need for consensus-building and further education regarding the forthcoming referendum.

Leading a delegation of the Catholic Bishops to the Jubilee House in Accra recently, Vice-President of the Ghana Catholic Bishops’ Conference (GCBC), Most Rev. Charles Palmer-Buckle, told Vice President Dr Mahamudu Bawumia that given the current poisoned political environment there was a need to postpone the December 17 referendum.

“We the Bishops are appealing to the Government and the Electoral Commission to postpone the Referendum since it would not cause any Constitutional crisis,” Archbishop Palmer-Buckle observed.

The Archbishop of Cape Coast added that “time is not on our side. We should take the best of decisions that will stand the test of time. Why not postpone it and work around a consensus?”

He explained that it would be expedient to postpone the referendum, or de-couple it from the District and Unit elections so that the local elections are not adversely affected. According to the Bishops, the situation on the grounds signifies the need for better education.

They were worried that partisan politics has eaten deep into every sphere of the lives of Ghanaians, such that it is difficult, if not impossible, for development to take place in the country.

Vice-President Bawumia said he invited the Bishops at the request of President Nana Akufo-Addo, who was then out of the country, to consult them on the way forward in respect of the referendum, which has generated a debate between both sides of the political divide.

He expressed surprise that the main opposition party, the National Democratic Congress (NDC), and other important Bodies in the country are asking the electorate to vote ‘No’ even though they, particularly the NDC, had earlier supported an amendment.

He explained that the decision for the Referendum is because President Akufo-Addo and the New Patriotic Party (NPP) want to further deepen democracy in Ghana, as stated in the Party’s 2016 Manifesto.

“Otherwise, why would someone who may like to consolidate power be interested in a referendum, when he already has the authority to appoint MMDCEs?” he wondered.

The Senior Minister, Yaw Osafo-Maafo and Hajia Alima Mahama, Minister for Local Government and Rural Development took turns to explain some of the issues on the referendum.

The referendum scheduled for December 17, 2019, seeks to, among other things, amend Article 55, Clause 3 of the 1992 Constitution to enable political parties to participate in district-level elections.

Article 55 (3), is an entrenched clause, which currently bans political party activity in district-level elections, It requires a referendum and a turnout of at least 40% and over 75% voters in favour of the proposal, to amend the Article.

This story was originally published in the Sunday, December 1, 2019 edition of The Catholic Standard and republished here with permission.