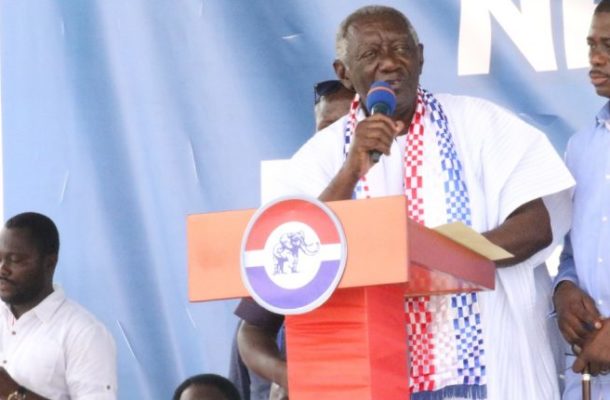 Former President of the Republic, John Agyekum Kufuor, Saturday, July 7, 2018, mounted the podium of the New Patriotic Party’s (NPP) 26th Annual Delegates Congress and cautioned his fellow party members to be weary of the political power they have won so that it doesn’t slip off their hands.

He told thousands of party faithful who have gathered at the Koforidua Technical University to elect new National Executives of the party that their monumental victory over their opponents in the 2016 general elections testifies to the fact that Ghanaians have seen the light which places a lot of burden on them not to disappoint but rather deliver.

Therefore, they must remain resolute and united and shun any extravagant lifestyle and as well swallow their individual egos and work for the greater good of Ghana and humanity at large since power could trick people of good intentions.

“I believe the last election – 2016, which gave us a monumental victory over our opponents really testifies to the fact that Ghanaians had seen this light that Danquah advocated way back. I believe Ghanaians trusted that it is NPP that will deliver both good governance and economic prosperity. This was why they voted the way they voted”, he noted.

He added “But fellow party men and women, power has a way to trick people even of good intentions. Power they say corrupts. They say absolute power corrupts absolutely. So at anytime even as we make progress, under the current government and we are making very serious progress when you look whether it is social interventions; whether it is in thinking big on the macroeconomic front; whether it is about looking into the future and achieving sustainable development growth, this government is doing very well and is not only Ghanaians who have seen what I am seeing. The international community is also seeing this and that is why we have long streams of visitors from all over the world coming and our President just one and half years in government is being invited all over the world to be consulted and to be encouraged.

“As an old Uncle, and Elder, I have come just only to remind our leadership and all of us within the party that we are only one and half years into power. Unfortunately for us the tenure of office of our government is so short, only four years. Four years – you don’t change the world with only four years but we want to change the world, we want to transform Ghana and to be able to do this, we need a very solid united party as the under courage for the great visions and great policies the government is launching to be given the chance of the day to win elections over and over again at the national level so that all these policies and programs will be realized for the people of Ghana as a whole.

“And to do this, I have just come and to plead with you, – and here let me remind you what our late chairman, Mr. B. J. Da Rocha said that we are in a party does not mean that we are friends. But at least we must share a common vision. We must know the destination we all want to reach – good governance for prosperity. We all want this and for this we must swallow individual egos and with all due respect, vanities for the greater good for our country and humanity at large. “Let’s sow together. Do not let us do anything that would begin to splinter us; would begin to leave rancor within our ranks. If we can overcome this and hold together, I assure you the people of Ghana will vote for us 2020; will vote for us 2024; will vote for us 2028 and into eternity. We will become the party of the nation and I believe in this sincerely and this is what I have come to tell you once again.”