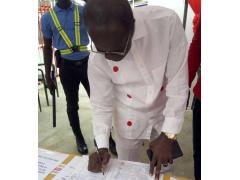 The Progressive People's Party's (PPP) booklet which is taking signatures to compel President John Mahama against freeing the Montie 3 contemnors, has been mysteriously stolen by unknown thugs.

The book, which has about 1,700 signatures yet to be handed over to the President, is believed to have been stolen by three young men who had pretended they were also signing the booklet at the PPP's headquarters.

The two other booklets which were also being signed have about 1,000 signatures according to the PPP's Communications Director, Papa Kow Ackon.