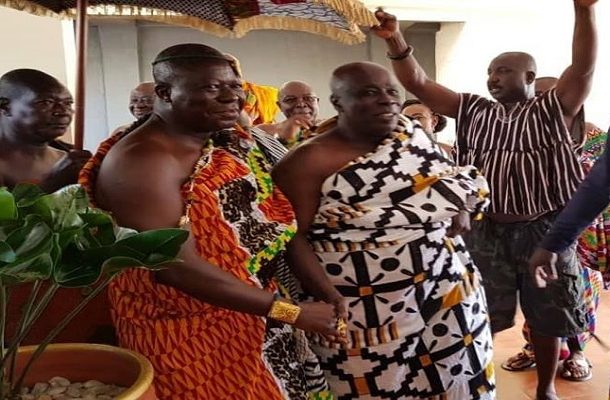 It has emerged that; the two powerful ethnic groups, the Ashantis and the Akyems  became enemies after pre-colonial politicians such as Captain George Maclean and Commander Hill pitched them against each other.

This revelation comes after the Asantehene Otumfuo Osei Tutu II pays a historic visit to the Ofori Panin Fie on Thursday.

Head of History Department at the University of Cape Coast, Professor Kwame Osei Kwarteng, has named trade as a factor for the long-standing rivalry between the Ashanti Kingdom and Ofori Panin Fie.

According to Professor Kwame Osei Kwarteng, the historic visit by Otumfuo Osei Tutu to the Ofori Panin Fie is a step in the right direction because it will reconcile the two powerful traditional rulers.
Otumfuop
Asantehene will be the special guest of honour at a durbar to mark the 75th anniversary of the late Okyehene, Sir Ofori Atta at a durbar to be hosted by Okyehene, Osagefo Amoatia Ofori Panin at Kyebi on Thursday.

But speaking on Adom FM’s morning show, Dwaso Nsem Thursday, Professor Osei Kwarteng, said the Ashantis who were then seeking total control over trading activities at the coast saw their dominance cut in the Battle of Katamanso.

The development eventually led to the killing of Opemsuo Osei Tutu II while crossing River Pra in 1717 by the Akyems.

He indicated that the leaders of the two royal houses are friends beyond the stools they occupy and have no bad blood between them hence their decision to bury their acrimonious past.