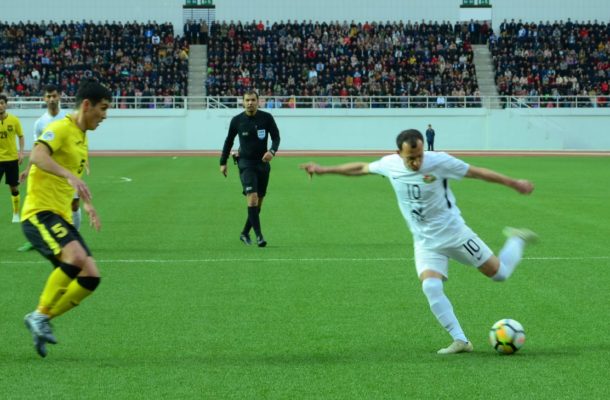 Ashgabat: Merdan Gurbanov's first half strike secured FC Ahal a 1-0 win over FC Alay of Kyrgyz Republic on Wednesday, with the Turkmenistan club advancing to the 2019 AFC Cup Central Zone Play-off on a 3-1 aggregate score.


Ahal came into the match with the upperhand, having secured a 2-1 first leg victory a week ago, and the host began brightly in front of rousing home support at the Ashgabat Stadium.

The visitors fought back but couldn't breach the Ahal defence.

Ten minutes before the end of the first half, Gurbanov's effort found the back of the net to place Ahal two goals ahead on aggregate.

Alay returned after the break more spirited, and looked to change the tide by making two substitutions in the 52nd and 56th minutes.

It was, however, to little avail despite bringing on Amir Sharifi in the 85th minute, as Ahal held on to their advantage to seal the win and a place in the Play-off.

Ahal will play host on March 6, as they welcome Tajikistan's FC Khujand in their bid to make their third appearance in the AFC Cup group stage.