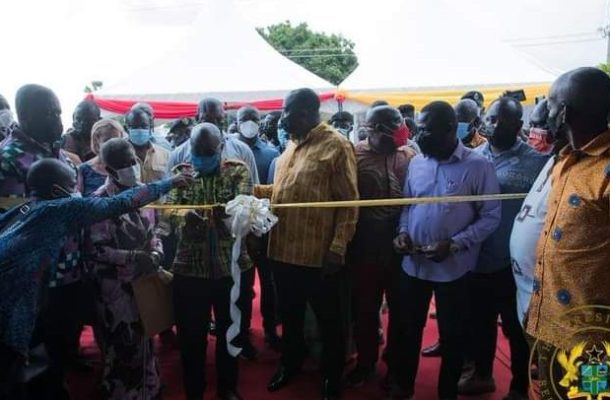 Equipped with 600 industrial machines, and with the support from the Ministry of Trade and Industry and Ghana EXIM Bank, the company was able to export 20,000 and 80,000 units per month, in 2019 and 2020 respectively, of hospital scrubs and uniforms for chefs to the United States. 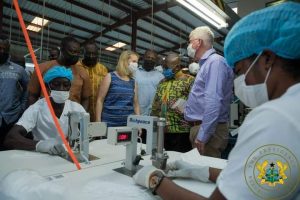 The company commenced operations in 2003 under the Government of former President John Agyekum Kufuor. However, its operations went down upon the exit of the Kufuor-led Government. In 2017, the company applied for support under the 1-District-1-Factory initiative, and has since seen its operations resuscitated.

President Akufo-Addo commended the management of the company, and, indeed, other garments and textiles factories in the country, for the support extended to the Government in the fight against the COVID-19, by domestically manufacturing personal protective equipment (PPEs) for use by frontline health workers and other professional. 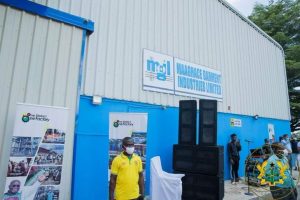 MaaGrace Limited was one of the leading garment companies that produced over 2 million face masks, 18,000 hospital gowns and headcovers, as well as 12,000 medical scrubs within a short period of time, a classic example of Government’s import substitution strategy, which is one of the strategic objectives of the 1D1F Initiative.

The promoter of the business, Mrs. Comfort Owusu-Agyemang, told the President of the significant employment opportunities created by the company, which underscores the strategic intervention the 1D1F programme is playing in fixing the challenges that confront Ghanaians, particularly youth unemployment. 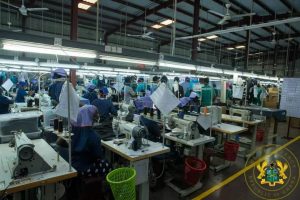 She indicated that some six hundred (600) youths from across the New Juabeng North Municipality and its environs have secured employment in their locality, which prevents rural-urban migration, another strategic objective of the 1D1F initiative.

With the support of Ministry of Trade and Industry, Ghana EXIM Bank, and Ethical Apparel Africa, the number of persons to be employed is expected to increase significantly.

1D1F Rationale
The establishment of the One District One Factory (1D1F) initiative is in fulfillment of a campaign promise by the NPP, under the leadership of the President, to support the private sector to establish at least one industrial enterprise in each of the administrative districts of the country.

The concept of the One District One Factory (1D1F), among other initiatives of the Government, is designed to transform the industrial landscape of the country, and build the capacities of local enterprises to produce high quality products and services for both domestic and foreign markets.

The contract was awarded to Messers King Dwosco Enterprise Limited with a contract sum of GH¢3,442,539.45 with EcoPlanners & Engineering Consult as consultants to the project.