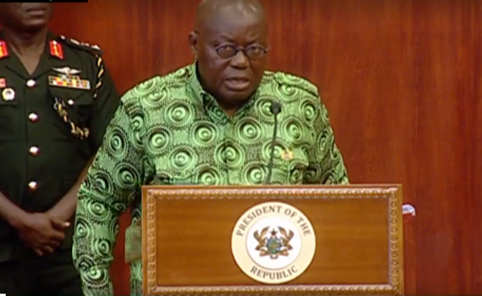 The embattled NPP Vice chairman for Central Region Horace Ekow Ewusi spilled the beans when he stormed the office of the Minister for Science and Environment, Prof. Kwabena Frimpong Boateng who doubles as the chairman of the Inter-Ministerial Committee on Illegal Mining for further discussions on their operations.

Ekow Ewusi revealed how mining concessions and equipment seized from Galamseyers were sold while others were secretly given out to senior party leaders, district chief executives and other party members to do the same illegal mining which has been abolished by the president who had put his presidency on line to fight the menace.

Auxiliary items confiscated included pickups, gold ore, gold dust and gold nuggets worth over $1.5 billion which had not been accounted for.
Other items were 900 excavators, 2,779 sophisticated weapons and ammunition and 4,045 other mining equipments.

It is suspected that proceeds from the sale of the gold are periodically deposited in the war chest of the president and NPP.

So far a total of $4.1 billion made up of $2.6 billion gold proceeds earned from illegal mining with the seized excavators and $1.5 billion worth of gold seized from Galamseyers were suspected to have been sold to Indian gold merchants in Dubai and deposited in private accounts. In addition to this, $500 million accrued from the sale of the excavators.

It is pathetic that the names dropped so far included that of prominent members of the society entrusted with powers to protect the interest of Ghana.

According to data from the Ghana chamber of mines, small scale miners produced up to two million ounces of pure gold in 2017 and 2018 alone, a period when the Akufo Addo had placed his presidency on line to fight the Galamseyers.

So the question is, where did that gold come from?
The big surprise is not a single dollar from the proceeds was deposited in the consolidated fund.

So is President Akuffo Addo seriously promoting the destruction of water bodies, forest reserves and arable lands in 120 districts within the Western, Central, Ashanti, Eastern and other regions for selfish ends?

Currently, the Ghana Water Company is shutting down water treatment plants in the affected areas because of frequent breakdown of plants which are fed with muddy waters instead of clean water from the rivers Pra, Birim, Ankobrah and others.

Large populations have been cut off from the use of treated water resulting in unbearable hardship including skin diseases, severe deprivation and inconvenience to the same people who brought the party and President to power.

President Akufo Addo is accountable to the people of Ghana, hence the state of the nation address.

The galamsey issue and its destructive tendencies are of utmost important to Ghanaians.

The president should as a matter of urgency, fully account for the proceeds of the sold gold and equipment seized during his state of the nation address as he is seriously asking for 4 more years for Nana.

Ghanaians also expect him to outline measures to deal with the galamsey menace to bring relief to the suffering masses.