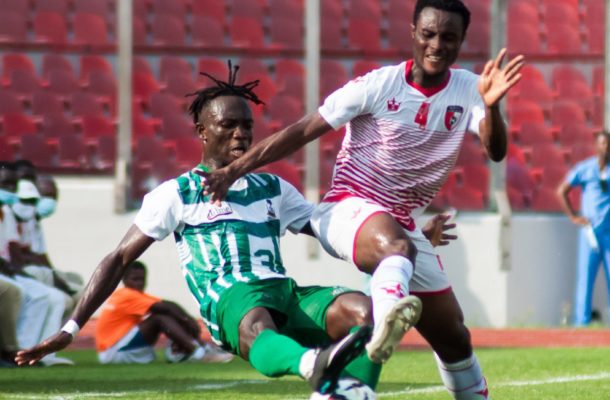 King Faisal suffered their first season defeat on Friday when they lost 1-0 to Berekum Chelsea at the Golden City Park in a match day four encounter.

Winger Atta Agyei scored the only goal of the match for the Blues who had gone three games without a win.

That result condemned King Faisal to their first defeat of the season after a flying start to the campaign which saw them winning three matches on the spin.

The Kumasi based side opened the season with a 1-0 win against WAFA and went ahead to Dormaa to annihilate Aduana FC 3-1 before beating AshantiGold SC 2-0 at the Baba Yara Sports stadium.

Striker Osman Ibrahim who is on loan from Asante Kotoko is leading by example with Zubairu Ibrahim, Enoch Morisson and Franklyn Osei being instrumental in their set up. The clubs top scorer last season Kwame Peprah is currently in South Africa with Premier League side Orlando Pirates.

Peprah netted twelve (12) goals and provided 10 assists in 29 League appearances for King Faisal last season but his absence hasn’t been felt at after finding an adequate replacement for him.

King Faisal have scored 6 goals and conceded two in the League – showing balanced team with so much potential.

Medeama SC suffered a 4-0 loss to Bechem United in their opening match of the season before drawing 1-1 with Bibiani Gold Stars at Tarkwa. They picked a point against Eleven Wonders at home before labouring to a 2-0 win against rivals Karela United on match day four. They have picked 5 points from their first four matches of the season and look desperate to end their inconsistent run.

In Bechem – Bechem United’s strong home record will be put to test by Dreams FC on Sunday. The Hunters, who lost to Accra Lions on Saturday, are 6th in the League table with 6 points while Dreams FC occupies the 4th spot with 7 points.

In Techiman – Eleven Wonders will fight to end their winless run when they take on Elmina Sharks on Sunday. The Techiman lads have gone four matches without a win after drawing two and losing two. Wonders lost their first match of the campaign to AshantiGold SC at the Ohene Ameyaw Park. A win over Elmina Sharks will kick off a very topsy-turvy season.