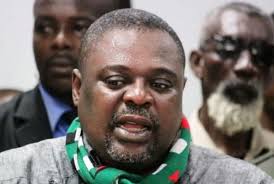 General Secretary of the opposition National Democratic Congress (NDC), Koku Anyidoho, has urged the Economic and Organized Crime Office (EOCO), to probe into the source of funding of the proposed procurement of 275 buses by the Acting New Patriotic Party (NPP) chairman, Freddie Blay.

According to the outspoken politician, the explanation given by Freddie Blay and his spokesperson, Richard Nuamah on the source of funding of the 275 buses were fishy which left him scandalized hence calling on EOCO to get to the root of the matter.

Mr. Blay in an earlier interview stated that he will not disclose the source of funding for the purchase of 275 buses he has proposed to acquire for the party.

According to him, he is dealing with a financial institution that do not allow him to reveal their identity till the deal is sealed completely.

He indicated that he has, through a facility, acquired 275 buses for the 275 constituencies of the NPP in the country.

Per his proposition, Constituency Chairmen and Secretaries are to co-sign for each constituency.

The buses, when delivered, will be run commercially by any bus operator in the country, a process he said they were currently deliberating.

“Money is shy, those who deal with you over money and those financing, you in one way or the other, don’t want you to disclose them and make so much noise. The financial institution is ready to help”, he said.

“Don’t forget that institutions have other clients too who will not be happy when you reveal who they are, till the contract is fully done. So, for one reason or the other, we don’t want to do any disclosures”, he added.

However, the claims which has aroused a number of concerns by anti corruption institutions including the Ghana Integrity Initiative (GII) who has since appealed the Commission on Human Rights and Administrative Justice (CHRAJ) to probe Mr. Blay.