'He was a proper man, we slept naked but didn't have sex'- Katie Price reveals passionate night with Simon Cowell’

Former glamour model and TV host, Katie Price, 38, has revealed intimate details about her passionate night with X Factor owner Simon Cowell, saying it was her first time with 'a proper man'.

Katie, mum to five kids, said the music mogul invited her back to his London mansion after an awards bash, but they didn't have sex even though they kissed and slept naked together. 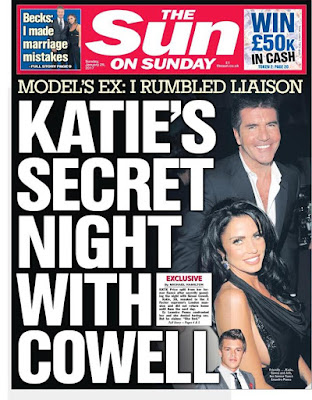 Speaking exclusively to the Sun UK, Katie said: “We kissed and I ran my fingers through his chest hair thinking, ‘This is the first time I’ve been in bed with a proper man’”

“We were both at the Comedy Awards and I was single at the time.

“I’d had a lot to drink and he invited me back to his place.

“I got undressed and we got into bed together. His bedclothes were all white.

“He had a really hairy chest and I got this real sense of being with a man for the first time.

“He was the oldest person I had been in bed with.

“I stayed the night with him and he got me a car home in the morning.

“We had fun but we did not have sex. In my opinion, he definitely isn’t gay!”

The Sun UK last week revealed that Katie's ex  Leandro Penna read text messages on Katie's phone showing she had an intimate relationship with Cowell, but Katie has said she feels betrayed by Leandro for speculating she had sex with Cowell.

According to Katie, she didn't have sex with Cowell, because her mum taught her a rule- how to stay away from one-night stands.

“Now I’m older I see more value in standing up for myself where men are concerned and speaking the truth.

“Once again, I’ve been put in a situation where I’ve tried to protect a man over the years – in this case Simon — but it never gets me anywhere.

“And now another ex — Leo — has betrayed me, reading personal text messages and speculating that I had sex with another man.

“I have never cheated on anybody.

“I just want to set the record straight and lead a happy life.”

“It was something my mum drummed into me from an early age, ‘If a man wants you he’ll wait for you’.”

“It would have been nice to have a relationship but I don’t think he ever saw it that way.”

“I was just 17 at the time and I think I sang Naked, a song by Louise Redknapp.

“I didn’t see him for a long time after that but we would meet from time to time at events and have lots of cheeky banter and innuendo.

“I often felt confused by our friendship.

“On one level he seemed to want to be intimate with me but on another level he denied it.

“He rarely invited me to his own events or spoke about me in interviews.

“But occasionally he would reach out like just before I went into the jungle (for TV’s I’m A Celebrity) for the second time.

“He called me to say how brilliant he thought I would be. Perhaps he was concerned I would reveal how intimate we had been?

“It felt as if he wanted to keep me separate from his public profile.

“I sensed he liked me but never involved me.”

Simon Cowell didn't hook up with Katie again till 2012 during his 50th birthday celebration, the same time her relationship with Leandro was ending.

“Simon and I were talking again and he said, ‘Why don’t you come round?’

“We made arrangements to meet up a few days later.

“I assumed it would be a party with lots of people.

“He hadn’t given me any reason to think he would want to be with me alone since the first time we slept together.

“For that reason I asked if I could bring a close friend and he agreed.

“Never in my wildest dreams did I think it would end up being just us three.”

Katie recalled: “We were driven by his regular driver and I remember going through some very big gates.

“Inside, there were candles everywhere and it smelled really nice.

“We were taken through to the main living room where Simon was sitting in a big Chesterfield type chair.

“I remember saying to my friend, ‘This is weird. What’s going on?”

She continued: “We arrived at 7pm and left at 6am.

“During that time, we didn’t stop drinking.

“He had a maid who kept coming back and forth with vodka — vodka and coke, vodka and lemonade.

"We didn’t sleep together that night. There was just lots of talk about industry people.

“The more drunk I got, the more I kept getting up to sing.

“Looking back it was humiliating. I was a knob.

“At one point I felt so ill, I threw up in his bathroom.

“It was all random, just so random. Would he have tried it on if my friend wasn’t there? I don’t know.”