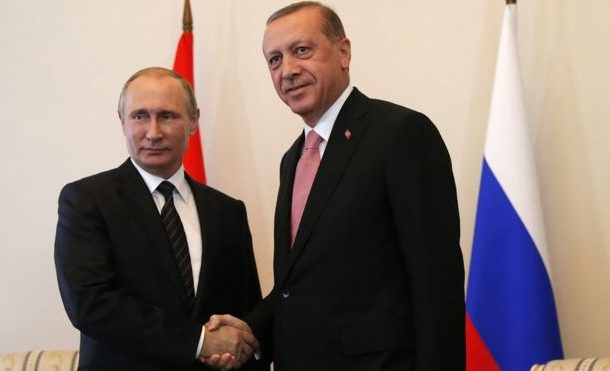 The leaders of Russia and Turkey have patched up a damaging quarrel, pledging to restore close economic relations.
Russian President Vladimir Putin said Russian trade sanctions on Turkey would be phased out "step by step".

"The priority is to get back to the pre-crisis level of co-operation," he told Turkish President Recep Tayyip Erdogan in St Petersburg.

Their relations soured last November when Turkey shot down a Russian bomber on the Syrian border.

It is Mr Erdogan's first foreign visit since an attempted coup last month. He has since launched a far-reaching purge of the armed forces and other state institutions.

Speaking in St Petersburg Mr Erdogan thanked Mr Putin, saying a call from the Russian leader after the coup "meant a lot psychologically".

He said "the Moscow-Ankara friendship axis will be restored".

Now Russia has decided to resume those package tours - an important source of income for Turkish resorts.

On the Syria conflict Mr Putin acknowledged big differences with Mr Erdogan, but said "we will look for solutions".

What could each side gain from the visit?

The war of words over the downed Russian jet delivered a big blow to trade. Turkey's exports to Russia in the first half of this year fell to $737m (£567m) - a 60.5% slump compared to the same period last year, Turkey's Daily Sabah reported.

The dispute put two major joint energy projects on hold - the TurkStream gas pipeline across the Black Sea and the Akkuyu nuclear plant being built by Russia's Rosatom in Turkey.

In St Petersburg both leaders pledged to restart those projects. Akkuyu will benefit from being designated a "strategic investment", Mr Erdogan said.

Before the dispute, Russia was a major export market for Turkish fruit and vegetables - so now Turkey is anxious to get the Russian import ban lifted.

What led to the thaw?


In June, the Kremlin said Mr Erdogan had apologised for the downing of the jet and had sent a message expressing "sympathy and deep condolences" to the family of the dead pilot.

Then, after the 15 July coup attempt in Turkey, Mr Putin expressed support for Mr Erdogan. He did not criticise Mr Erdogan's crackdown on political opponents and purge of alleged "plotters" in state institutions.

The BBC's Sarah Rainsford says Russia is keen to capitalise on Turkey's cooling relations with the West following the failed coup.

Mr Erdogan was angered by criticism from the EU and the US of the mass detentions of suspected plotters.

He demanded that the US extradite Fethullah Gulen, the US-based Muslim cleric whom he accuses of organising the coup. But the US says Turkey must provide solid evidence before such a move can be considered.


They back opposing sides in Syria. Turkey is furious at the scale of Russian air support for Syrian government forces, as Mr Erdogan reviles Syrian President Bashar al-Assad.

Russia has accused Turkey of backing Islamist anti-Assad groups, including some accused of "terrorism" in Russia.

Turkey is at war with the Kurdistan Workers' Party (PKK) and the PKK's Syrian allies. Mr Erdogan has accused Russia of arming the PKK.

For centuries Russia and Turkey have been rivals for influence in the Caucasus and Black Sea region.

Turkey was also angered by Russia's annexation of Crimea in 2014, accusing Moscow of violating the rights of Crimean Tatars. The Muslim Tatars have long had close ties to Turkey.